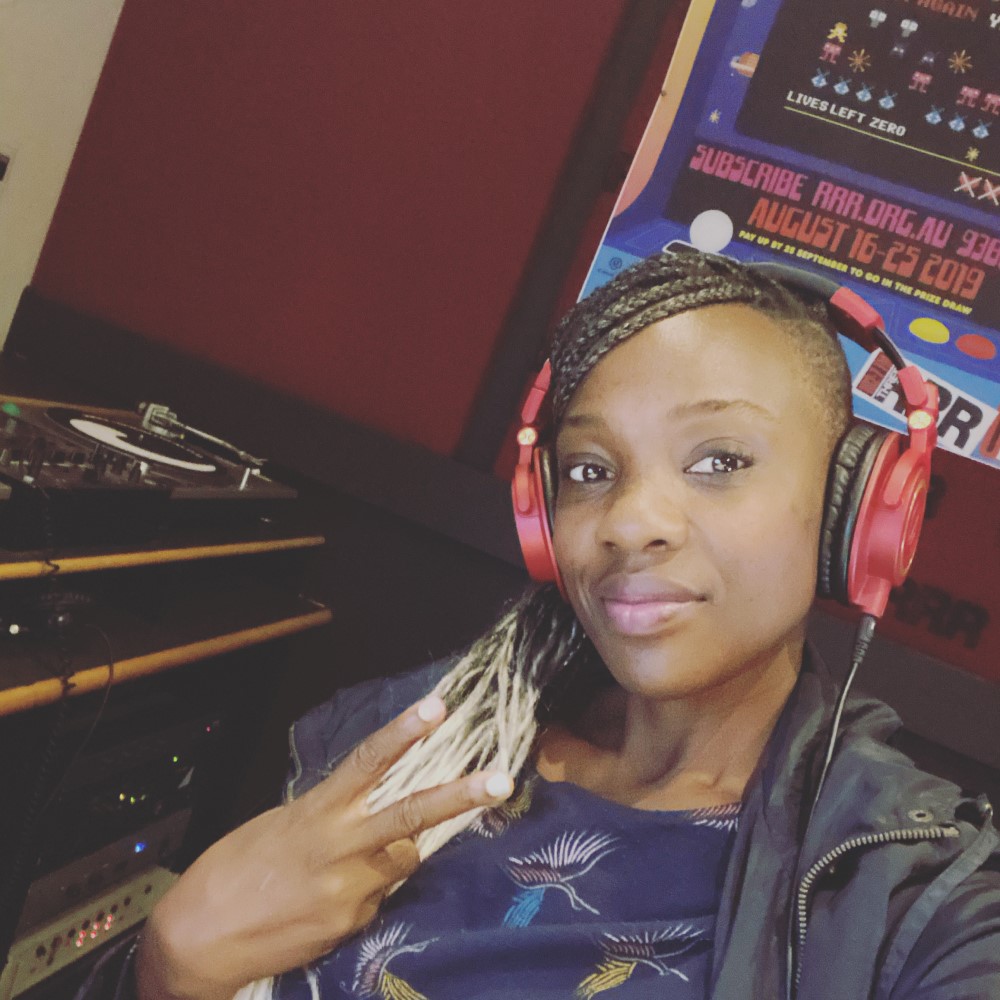 Every Monday from 10pm to midnight, Melburnians tuning into 3RRR can hear Eva Lubulwa’s deep, resonant and impassioned voice as she hosts her weekly radio show, Highly Melanated, “a melanin-soaked show celebrating the creative genius of people of colour locally, nationally and world wide.” A powerful and articulate personality, she can speak about matters that are personal and political without breaking a sweat. Lubulwa was born in Melbourne to Ugandan parents; her parents’ history and experiences have shaped their daughter and she is outspoken on racism in Australia. She’s also an artist – her black-pen drawings have been exhibited in galleries and bars around the city.

Lubulwa went to a private girls’ school where she was the only Black student in her year, but she never felt alienated. It wasn’t until she traveled with her Serbian-Australian husband through Asia and Europe that she noticed the everyday racism of men, women and children in their attitudes and behaviour toward her (trying to snap furtive photos of her, openly laughing and pointing). Lubulwa attributes the end of her marriage to this trial-by-fire, in which the constant mental and emotional toll of racism exhausted their partnership.

Fast forward a couple of years to 2017 – Lubulwa was given a graveyard shift at 3RRR, one of Melbourne’s longest running community radio stations. “My first engagement with radio resulted from my friend inviting me to do an arts show, and part of the promotion for the show was being interviewed on radio. I discovered that radio is a rush, you know? Trying to talk to people and be comfortable even when they’re not in the room, it’s a blessing,” she remembers. Having proven herself, she went on to establish Highly Melanated.

“My experience working with Triple R has been amazing,” she says. “They have loved my shows and my ideas, and are willing to let me go on this amazing journey. It’s not often you can say ‘I’m doing a show on Uganda and Australia!’ Tim from Teenage Hate used to do a show next to me, Mia Timpano has been a wonderful friend and mentor during this time – there’s so many presenters and people on the board and in the background who have done so much for me.”

The show “is about highly melanated people and all that we do,” Lubulwa explains. “I interview these people making amazing music in Melbourne, really exploring what it means to be African Australian. People who wake up and can’t do anything but making music – those are the people I’m super excited to talk to. I’ve been able to interview huge stars from Uganda recently: A Pass Bagonza; Judith Heard who is a Ugandan model and founder of Day One Global (an organisation that seeks to end rape and sexual assault);  Suzan Mutesi; and Mwanje, who is a singer and songwriter gaining more radio time and attention locally through performing in digital festivals like The Drive-In.”

For the radio host, it’s as much about showcasing others’ talents as it is connecting the two cultures that have shaped her very existence. “I’m a Ugandan-Australian constructing my identity backwards,” Lubulwa says. “Racism robs me of my Australian heritage and location robs me of my Ugandan heritage, because Australia is where I live most of the time. For me, I explore heritage through music. As time has gone on, I focus on Uganda and Australia and then I extend that out to the wider diaspora. The intention is to bring Australia and Uganda together over the airwaves.”

Lubulwa says she has gone on “a huge racial journey over the last few years, because racism would have slowly and surely killed me. Australia has been what I’ve called home for so, so many years. I had accepted or ignored the racism in this country for quite a while. When people look to you to talk about it and know about it, or to provide a solution to it, that’s a big burden. Racism is still here, it’s still strong and it’s tiring.” As exhausting as her experience has been, Lubulwa sees hope for the future. “The conversations that are getting louder, the murmurs that are getting stronger, the fact people – not just black people anymore, people everywhere – are saying no, shows we are willing to have a discussion,” she points out. “The problem with racism is that it affects the minority and the minority are required to find the solution, so it’s vital now that people come to the table and have the conversation when racism doesn’t affect them.”

Lubulwa is a music lover, obviously. I try to contain her to five artists she recommends Audiofemme readers check out.

“Recho Rey is a hip hop and rap artist from Ugandan rap with dancehall, reggae vibes.”

“Winnie Nwagi, she’s a Ugandan singer/songwriter/badass. They call her Firestarter because she dances like a genius, right? She has this deep soulful voice. She’s also done a song with Recho Rey.”

Eva Lubulwa presents Highly Melanated on 3RRR weekly. The show can be streamed from anywhere in the world or heard back as a podcast, with playlists also available.