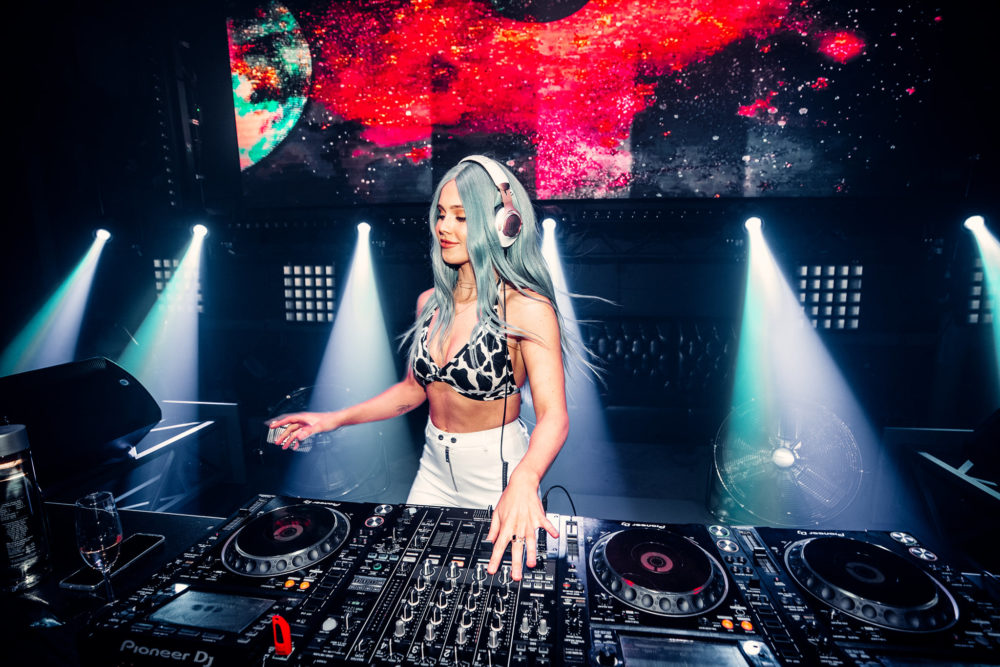 DJ Tigerlily, much like her exotic botanical namesake, is colourful, bold and born to attract excitement wherever she goes. And the Melbourne-born DJ has gone a lot of places in her 28 years, powered by her skills and love for creating and performing electro sets. From Las Vegas to Washington D.C, Los Angeles to New York, Belgium, Sweden and Seoul, Tigerlily has performed at Lollapalooza, Ultra Music Festival, Electriz Zoo and Hakkasan. The only thing louder than her blend of commercial house, Brazilian bass, and electro beats is her ever-changing, brightly hued hair.

Tigerlily, or Dara Kristen Hayes, started DJing at 18, though her immersion in music and its technicalities began much earlier, when her parents fortuitously enrolled her in music school. Tigerlily learnt piano from the age of three through to eighteen, completing the formal Australian music (AMEB) exams. She also studied trombone performance and composition throughout high school. “I did Music and Music Extension for the High School Certificate (final year graduation in Australia) and majored in performance,” she says. “In regards to dance music and DJing though, I don’t have any official training. I first started listening to dance music in my mid teens, about 15, and fell in love with it. I began creating my own music at the age of 18, messing around in my bedroom with a set of decks that I had borrowed.”

After completing a Bachelor Degree in Marketing and Sociology at the University of Sydney, she took part in the 2011 Your Shot DJ competition. Though she didn’t win, the runner-up recognition she received “kickstarted my DJ career,” she recalls. “I’m very much a self-taught producer, too. I downloaded Ableton and started messing around with it in my own time, until I was able to write melodies, beats, and songs. Producing and mixing came really naturally to me. I loved the process of translating my knowledge for classical music into a more contemporary platform.”

Two years after coming second in Your Shot, now defunct Australian electronic music publication InTheMix placed her in their top ten DJs of 2013. As far as accolades, recognition by staff and readers of the publication was no small feat. Indeed, two years later, her single “Paradise” made the Australian Record Industry Awards singles chart, peaking at number 67 in 2015, and the uplifting “Feel the Love” soon followed. InTheMix went on to vote Tigerlily Australia’s number one DJ for three years in a row, leading to her title of “Australia’s EDM Queen” by Tone Deaf.

She’s continued to drop one-off tracks in lieu of releasing an album because, as she explains, “The dance music world is very single focused, so albums don’t make sense for an artist like me.” Her collaboration with KSHMR, “Invisible Children,” is proof of her ability to turn Bollywood style beats into a club bangers, while the vocal, melodic house track “Ashes” shows a poppier, more contemplative side. But her latest single, “Get Down” channels a slinkier, more traditional house vibe than her previous work.

As royalty goes, her friendship and professional work with Tiesto, one of EDM’s most well known DJs, seemed destined. “He has been a great friend and mentor for me over the past few years of my career,” she told Tone Deaf in 2017. “He’s provided me with opportunities to warm up the dance floor at his own concerts with up to 30,000 people. We went back-to-back about a year ago in Vegas and I’ve never mixed with anyone like him before.”

When not spinning records and winning over global festival audiences or major brand clients, including Samsung, Ford, Adidas and Women’s Health magazine, Tigerlily is tending to her own podcast, posting vlogs on YouTube, or advocating for animal rights, wellness and fitness. She has spoken at events, and raised awareness for campaigns, animal sanctuaries, environmental charities and bushfire fundraisers. In 2018, Tigerlily wrote a guide to going vegan for Cosmopolitan magazine. “The best thing about being vegan is the way that it makes you feel and the immense amount of energy and happiness that I get after every single meal,” she told PETA.

Tigerlily admits the current pandemic situation has been a challenge, but certainly not one that has paralyzed her creative energies nor dampened her enthusiasm for multimedia projects. “I’ve been focusing on writing music and getting creative online with my social media and online presence. I work with some amazing brands, so I have been continuing to do some fun work with them,” she reveals. “Not to mention, I’ve been creating my own fashion line, merch line, and am continuing to be heavily involved in the animal rights movement via @our.soul.purpose. I’ve also been performing online regularly, and have just started DJing back in clubs last week, the first socially distanced party that I have played – and I loved it!”

“The Aussie EDM scene is really supportive and it’s so awesome to see so many different people working together to make the best of this very weird time right now,” she says. “Recently, I’ve been seeing DJs, producers, club owners, promoters, and everyone else involved in the scene really join forces and support one another.”