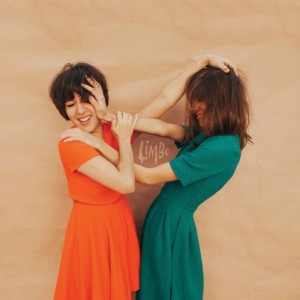 There are few things better than pop music that uses a bright, upbeat exterior to hide a deeper, darker message, and that’s exactly what the Riverside, CA based sisters Summer Twins have created with Limbo. Consider the album name, for starters. As well as being a fun party game, limbo also has the creepy definition of “an abode of souls that are, according to Roman Catholic theology, barred from heaven.” When used more casually, it can also mean being stuck between two places, which makes sense since the band’s sound is stuck between a blend of decades-old doo-wop and soul, more modern psychedelic rock and current pop.

Their songs are full of fuzzy, well-crafted guitar hooks, electric organ, and the back-and-forth vocals of sisters Chelsea and Justine Brown. Each one is a variation on an old-school genre: There’s “Our World,” which has a “slow dancing at a 1950’s prom” kind of vibe, the Bo Diddley-esque guitar rhythms of “Fire,” and the soulful guitar lines on “JuJu.”

While songs like “Florence” and “Dreamin” seem to be straightforwardly nostalgic and inspirational, Limbo gets off to a less cheerful start with “Blinds.” The verses of the song are sparse, aggressively punctuated by staccato guitar as they sing about an anxiety that drives them indoors: “I run into things that I don’t want to see and my feet keep on tripping/I hear whispering, they keep calling my name, but I don’t want to hear anything.” “Demons” may seem like an inspirational song about achieving happiness by overcoming your fears, but in its delivery, the message comes across more like a warning: “When the demons creep on up, you have got to shut them up/They will eat you up inside, you won’t make it out alive.” And, the upbeat, pop-rock song “Love Within” advises listeners to keep their true feelings hidden to the point of not letting the object of their affection reach them easily by phone, see them cry, and even not eat when they’re starving.

But don’t be scared that Limbo will leave you down. Despite throwing in some dark lyrics, the Summer Twins haven’t created a depressing album, they’ve just put a quirky, refreshing spin on topics related to life and love. And also, Ouija boards.

Limbo will be available via Burger Records on October 2nd. You can stream the album here. For instance gratification, check out some of their earlier work below.