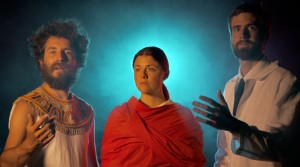 A forrest gives way to a wide, open river where the air is warming up with the dawning of the sun. The smell of trees and ground colliding with the freshness of the clear water. The only sounds heard are crickets chirping and the water splashing gently against a canoe — a quiet place before the world is fully awake. This is the serene setting that I imagine soaking in Breathe Owl Breathe’s album, Passage of Pegasus.

Most of the band’s sixth album involves smoothly crafted melodies blended with vocalist Micah Middaugh’s throaty, deep hymns. Middaugh’s baritone is reminiscent of The National’s frontman Matt Berninger. With the booming pitch comes an atmosphere of not only relaxation, but also a hint of despair. “Love’s become an artifact/ a rattle in your hand, archeologist,” Middaugh croons in the opening track, “Vision Quest.” It is a brooding that is difficult to resist. There’s no better way to shed your own depression than singing along to someone else’s; it’s a consolation that we’re not the only person who feels that way sometimes.

The dreamy, moody songs are easy to soak up and revel in. Titles such as “Vision Quest,” “Silent Movie” and “Hologram” further advance the dreamy, other-worldly feeling the songs themselves elicit. Lyrics also reflect the daydreaming playfulness of the songs. In “Ferns Move,” Middaugh croons, “In the fortress of the mind, make believe never dies.” The band has clearly spent time getting lost in their own alternative version of reality and they invite the listener to join them with comforting guitar strokes and smooth cello plucks.

With all of the brooding, the first half of the 10-song album burns slowly. But it’s not a bad thing. Middaugh joins bandmates Andrea Moreno-Beals, cellist, and Trevor Hobbs, keyboardist, to create an enjoyable ride through several folksy alternative songs. However, Passage of Pegasus takes a turn halfway through when Middaugh and the gang adds some electronic mixing and more pronounced beats to the album on “Explorer,” as well as the following track, “Sand Stone.” It’s a nice break from the heaviness of earlier songs.

Breathe Owl Breathe still showcases Middaugh’s baritone voice and moody lyrics, but this time with a variety of instrumental accompaniment. The contrast in deep voice and light electronics is fun and playful. At times, Moreno-Beals joins Middaugh on the chorus to give the songs a fresh punch with her somewhat shaky, yet overall enjoyable singing. Her singing adds a joyful tone to the otherwise uneasy “Followin Ya.” The chorus declares, “I know something is followin ya,” which could be creepy without the upbeat tone in which it is sung.

The album concludes with a descent back into the tone of the first half of the songs in “Two Moths.” The track begins with the narrative of two moths who help each other through a difficult time. When they find each other, things become better and seem to go alongside the uplifting, sweeping instruments as well as several rounds of “oh’s” and “ah’s.”

Passage of Pegasus explores a journey through the band’s experiences leading up to this point. Having come together almost a decade ago, they have weathered much to get to the point where they currently stand. The effort doesn’t go unnoticed and results in an album expressing not only despair, but also some hope. Breathe Owl Breathe have crafted an offering of acceptance and provide a sound that relates to both their fans as well as new listeners.