To get you as pumped as we are for our CMJ 2013 showcases, we’re introducing each band to you by asking them five unique questions.  And The Kids is playing Spike Hill, 186 Bedford Ave. in Williamsburg, BK on Thursday, October 17th at 1PM.  You can RSVP on facebook or DoNYC. 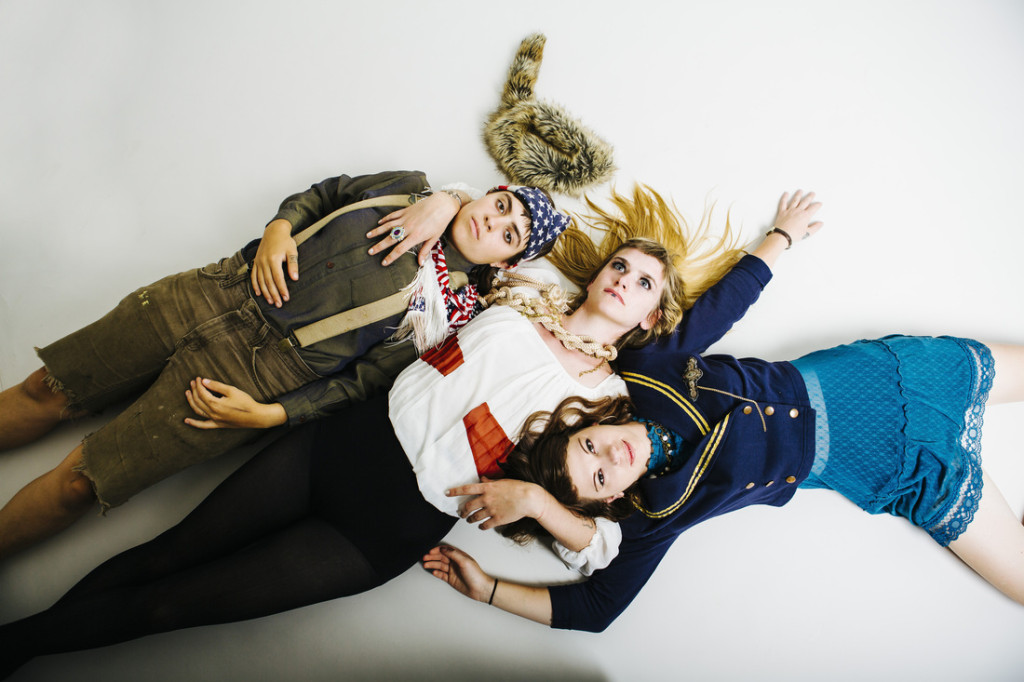 And the Kids is made up of Hannah Mohan (lead vocals, electric ukulele and guitar), Rebecca Lasaponaro (vocals, drums, bells) and Megan Miller (vocals, synth, glockenspiel, woodblock).  Playing what they call accessible unconscious existential indie folk rock glitter popsicle crisis music, they have been packing the sidewalks and clubs from Northampton to Boston to New York City with their fierce infectious harmonies, tight and unique grooves and songwriting that has the ability to reach down and tug at the truths of their generation and beyond.  Hannah and Rebecca met in their grade 7 music class and have been collaborating ever since.  Megan Miller direct from Canada met Hannah and Rebecca at the Institute for the Musical Arts (IMA) in Goshen, MA at a women’s recording and sound engineering program and together the trio is on a mission to inspire the hearts of all living beings of light and laughter one stage at a time.

AF: Hannah and Rebecca – you met in 7th grade music class. What are some of the songs you remember singing as kids?

ATK: The first song we sang together is Tom Sawyer (that irresponsible child…)

AF: During the filming of your “Cats Were Born” video you were living in a tent and practicing in an electrified portable storage pod. What made you decide to do that? Can you tell us more about the experience?

ATK: It’s really hard to find a place when you have two dogs, you wanna play really loud music all the time, and you have no money. Eventually the place was condemned so we had to leave. Overall, it rocked.

AF: There’s some unexpected twerking toward the end of that video. What do you think about all the controversy surrounding twerking these days?

ATK: We don’t think of the controversy – our twerking was hilariously spontaneous.

AF: For a while you were running an underground studio space and performance venue called JamPony – it sounds rad! How did you start it and what ended up happening to the space?

ATK: Long story short, Hannah and Rebecca rented a commercial practice space in Holyoke and it came with a bar and pool table so they had shows there. Then Hannah slept there for a while because she was without home. We found out during the end of our lease that a lot of our equipment was being stolen (from the manager’s coke-head son…seriously). So Hannah and Rebecca peaced when the lease was up.

AF: You stated that you’ve mostly built a fan base by busking in and around Northampton – is that true? When you’re in the streets vying for the attention of passersby are you performing as And The Kids or doing something else altogether? What was the strangest reaction you ever got from someone?

ATK: Yes, we busk as an acoustic version of And The Kids. Funny you should ask, one time a listener waited until our song was done to talk to us and we knew the whole song that they really wanted to talk to us. They offered us free drugs, a hair tie and a pig roast for our birthday party. Just kidding, nothing really strange happens except for the occasional asshole who tells us to stop playing.