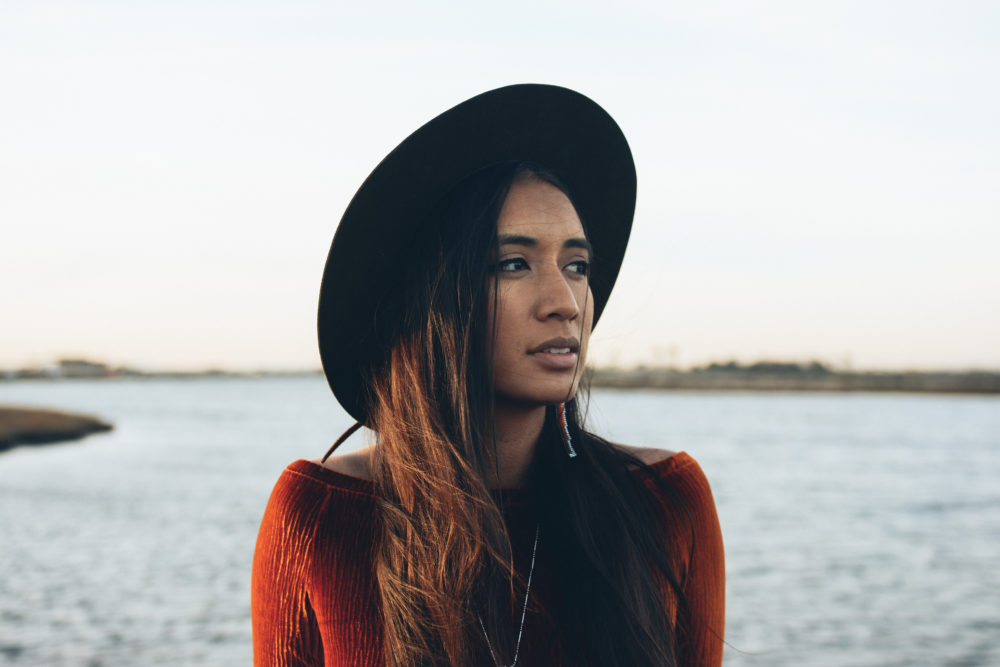 Every one of Raye Zaragoza’s songs has a political message. It’s sometimes a very specific one, as in “Driving to Standing Rock” and “In the River,” both about the Dakota Access Pipeline, and often a broader one, as in “Fight for You,” a call for people to speak out about injustice and stand up for the oppressed.

Her latest single, “Fight Like a Girl,” falls somewhere in the middle, advocating for intersectional feminism with lines like “grandma nature, mother moon/show me what to do/they are taking our rights away/policing our bodies.” For the folk singer-songwriter, who is of Native American, Mexican, Taiwanese, and Japanese descent, inclusivity has always been paramount.

Zaragoza has been performing professionally since she was 19, starting off playing two-hour sets in exchange for a piece of pie at an LA pie shop. She worked restaurant jobs until age 23, and for the past four years, she’s been pursuing music full-time, putting out her first album Fight for You in 2017. Later this year, she plans to release her sophomore LP, recorded with Tucker Martine (who has worked with The Decemberists, Thao & the Get Down Stay Down, case/lang/veirs, and others). With the quarantine limiting her ability to produce a more elaborate video, she recorded and shot herself performing “Fight Like a Girl” in her own home.

We talked to her about the message behind her latest single and the role of political activism in her music.

AF: What inspired the song “Fight Like a Girl”?

RZ: I wrote this song because I wanted to write an anthem with marginalized women at the center. The voices of women of color have not historically been at the forefront of feminism, and I think 2020 is an important time to change that. I wrote this song around the time that I met Deb Haaland, one of the two first Native American women in congress [D-New Mexico]. It’s women like her that remind me that women are capable of anything. I also really wanted to reclaim the term “fight like a girl” as an empowering term rather than what it meant on the playground when I was a kid.

AF: What do you hope people take away from the song?

RZ: I really hope the song will comfort those who have ever felt disempowered by their gender. I feel my greatest way of contributing to making the world a better place is comforting souls within it. I felt like such a lost misfit for most of my life, and music has given me so much solace. I hope this song will do that for others.

AF: What does fighting like a girl mean to you?

RZ: For me, it means to view the feminine energy within me as a strength rather than a weakness. We all have feminine energy, no matter our gender. And I feel that society has conditioned us to think that this part of us is our weakness. So “fighting like a girl” to me is channeling this energy and using it to become strong, brave, and vulnerable. It also means to reclaim my voice as a woman and stand up for myself!

AF: You describe “Fight Like a Girl” as a call for feminism to include all women. In what ways do you see it falling short of that right now?

AF: Activism plays a big role in your music. Why do you think it’s important to use your voice this way?

RZ: Sometimes I feel silly calling myself an activist. So many of my “activist songs” are really just me singing about my life and experience. Sometimes it feels that as a woman of color, my very existence is politicized in a way. So, the deeper I go with my own self-discovery and songwriting, the more “political”and “activist” the songs get. Really, I’ve never thought of it as important or something I should do. It just is what I experience and observe in song form.

AF: What issues are you trying to spread awareness of right now?

RZ: Right now, I am most concerned about spreading awareness in regards to indigenous communities in need. This virus is devastating tribal nations. I urge people to learn more and donate at Return2Heart.org.

AF: What are you working on now?

RZ: Working on an album release that will be happening later this year! Also always writing new songs. With all that’s going on, there is so much to write about and reflect on.