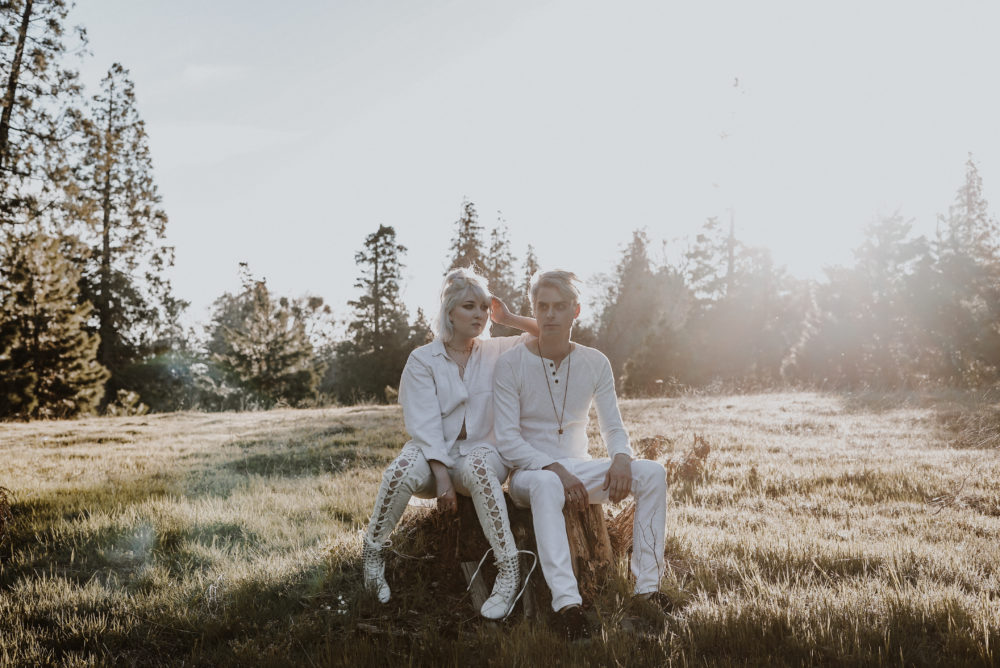 If you were in your school orchestra growing up, you probably at some point played Vivaldi’s “The Four Seasons,” a series of concerti that takes the listener through each season of the year. Future Moons’ latest EP Seasons is kind of like that, but instead of string instruments, the ethereal duo uses layered vocals, distorted guitar notes, and xylophone tunes to illustrate winter, spring, summer, and fall. Three evocative instrumental interludes between each song round out the seven-track EP.

The concept was the end product of a bunch of journal entries vocalist Kota Wade — who makes music with her husband, guitarist Tommy Oleksyn — wrote to keep her creative juices flowing. “I realized I had written about a lot of nature things and had a lot of different feelings for each season,” she says. “I turned my journal entries to lyrics and put music to it.”

In addition to the natural phenomena it illustrates, the EP presents “a love story throughout the 365 days of a year,” says Wade. “There’s no heartbreak, there’s no climax, it’s just this nice, comfortable love that happens in the span of all the seasons.”

“Entangled,” the first song on the EP as well as Future Moons’ very first single, encapsulates winter, with lyrics that paint the picture of a cozy indoor scene: “sheets all tangled at the foot of the bed / can’t tell where you start / can’t tell where I end.” The atmospheric production, breathy vocals, and piano add to the seasonal theme — almost the auditory equivalent of fog on the windows.

“To me, piano is very wintery. I just imagine sitting by a fire as someone’s playing,” Wade explains. “Winter doesn’t really have its own sounds because winter’s very quiet, so I wanted to be more focused on the lyrics and the intimacy and the love story.”

After an interlude called “Rain,” which portrays raindrops with a xylophone, the EP transitions to the spring song, aptly named “Petals.” On top of dynamic percussions that tie the song together from beginning to end, dark melodies contrast with hopeful lyrics: “two flowers vibing / stunned by the other, when the rain turns violent / we move to each other.”

Using samples of real cricket chirps, “Crickets” takes the collection from spring to summer, which is represented with the second single “Golden,” a song inspired by the Southern Californian mountains. Featuring soft guitars and synth pads, the track was meant “to feel like it was floating,” Wade explains. “So, it’s pretty minimal, a lot of layers in vocals. I wanted it to feel breathy and warm and almost slightly sensual, almost how summer feels, just dripping golden.”

The next interlude, “Wind,” aptly employs wind instruments before the EP closes with “Grey,” which creates a cinematic sound with heavy guitars, drums, and orchestral instruments. Wade’s voice gives off metal vibes as she sings, “I’m dancing on the breeze / I’m floating like I’m free.”

Wade considers “Grey” a throwback to the duo’s previous life as Bad Wolf, an alt-rock band they formed with several other instrumentalists. Last year, Wade and Oleksyn decided to break off and play under the new moniker Future Moons, and Seasons represents their first project since making that move. “We wanted to get more experimental, more modern with different instruments, and it just kind of branched into its own thing,” says Wade.

Wade also has a past life as a contestant on The Voice, which she says increased her confidence in her vocal abilities. “I had pretty much only ever considered myself a writer to that point,” she remembers. “I had been a vocalist in my bands, but writing was definitely what I considered my strength. So it was pretty crazy to go on there and have three chairs turned just as a vocalist. That was definitely a boost of confidence, like, ‘oh, I can do more than I give myself credit for!”

At the moment, the LA-based duo has another project up their sleeves, and its concept is even larger-scale than the last one: it’s an album inspired by outer space. “We kind of did a whole Earth album, with seasons based on Earth seasons in nature, and now we’re going outside Earth to focus on the other planets,” Wade explains. “We’re both obsessed with space – that’s how the new name came about — we just wanted it to reflect us.”

That one’s going to be a tough act to follow, but I’m holding out hope for an album that grants each galaxy in the universe its own song. In the meantime, Seasons will give listeners a newfound way of looking at — or at least listening to — the planet where they live.