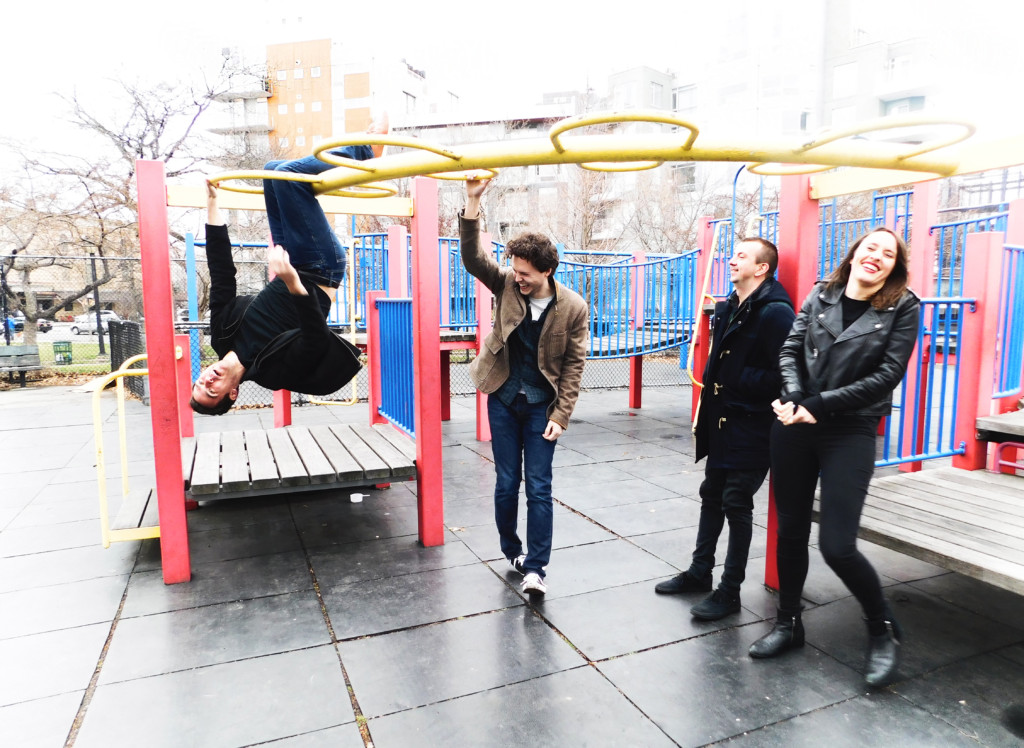 “We’re a lot to handle.” “We’re pretty laid back.” Dani Lencioni and Drew Broussard overlap the contradiction adorably, with the former shooting a broad red grin at the latter. Dani is the frontman—frontwoman, technically, but she wears the pants in this family and bears the tongue-in-cheek title in a song of the same name—of Evelyn, Drew is the lead guitarist, and they’re bf/gf in classic BK fashion. Bassist Zachary Joy Smith sits to Drew’s left, drummer Bryan Miltberg is to my left, and Jordan Kisner is several thousand miles away in Manila on assignment, because sometimes journalists leave Brooklyn for their stories (weird). Whatever the truth is, I’m in for one hell of a show.

If I didn’t have these characters in front of me, I’d imagine Evelyn as a dazed girl in a button-down dress, seemingly shy, quietly out of place among scruffier alt kids, yet spirited and quick to prove she’s sharp in conversation. The titular song off their EP Light Full muses: “Oh, to be delightful;” perhaps that adjective best describes both this phantom girl and the band’s work all at once. Dani drafts and delivers lyrics that ponder, that wander, that tumble out as they’re needed. Like a Morrissey sing-song with a thorough softness, not lacking in occasional bursts of sass, but definitely void a jaded edge and without the allusions to hating Queen Elizabeth.

Most importantly, Evelyn bears the amusing distinction of being the first band to order booze with our meals. Prepare to be entertained.

The Scene: Dani gave me two options for brunch, the first being Egg in Williamsburg. The band is friends with the chef there and spent a lot of time turning the place into an event space for The Bellwether, an arts collective Jordan, Drew, and Dani help run. Instead, we end up sandwiched in a wooden booth at Enid’s.

Half of why is because it’s easier to get a Sunday morning table-for-five at Enid’s. The other half is because it’s my favorite brunch place (like the restaurant love-of-my-life) and Dani’s as well. So I’m thrilled, even when our Bloody Marys arrive stuffed to the brim with a veritable Farmer’s Market of vegetables. Truthfully I’m more of a grimosa girl.

11:18 We’re talking about Bryan’s very legitimate job as a teacher so I ask the rest of Evelyn about what they wanted to be when they grew up… before, you know, failing and finding their current professions. We decide to Round Robin it, the preferred format for the day.

Dani wanted to be the first female baseball player for the Dodgers. Not softball, baseball – she’s very clear on that. She then floated around following whatever her parents suggested (doctor, psychologist, journalist) and landed in the theater world, and is working in education at the Whitney.

Drew originally went into acting, and he’s done all sorts of work across New York: Shakespeare, musicals, the usual. But between all the auditions and the constant hustle, full-time acting took its toll. So he restructured, working at the Public Theater and the occasional odd editing gig here and there.

Apparently this is a theme because Zach was also an actor. He was in a memorable web series about Adolf Hitler and Joseph Stalin being college roommates and, less eyebrow-raising, toured with a Texas troupe for six months back in the day. Working on musicals with the latter pushed him towards music, which seems like a good trajectory.

Evelyn sort of convened in this theater world, it seems, save for Bryan. “We found Bryan on the internet,” Dani says.

It was Craigslist. “I actually responded to a bunch of ads, I don’t know if I ever told you that,” Bryan confesses.

Dani feigns shock. “You mean you didn’t just throw your eggs in one basket?”

11:32 Historically Dani makes the gang wear fancy outfits, a decision that spawned from their first show coming out party, a wishful “black tie” affair. “Drew does dapper very well, so I was like, ‘Do your situation.’ And then I was like, ‘Zach, dress like Drew.’” They didn’t want to be another flannel-wearing Brooklyn band, so when Bryan signed on, he put his best suit forward, too… except for today. More than half the table is wearing some kind of plaid. 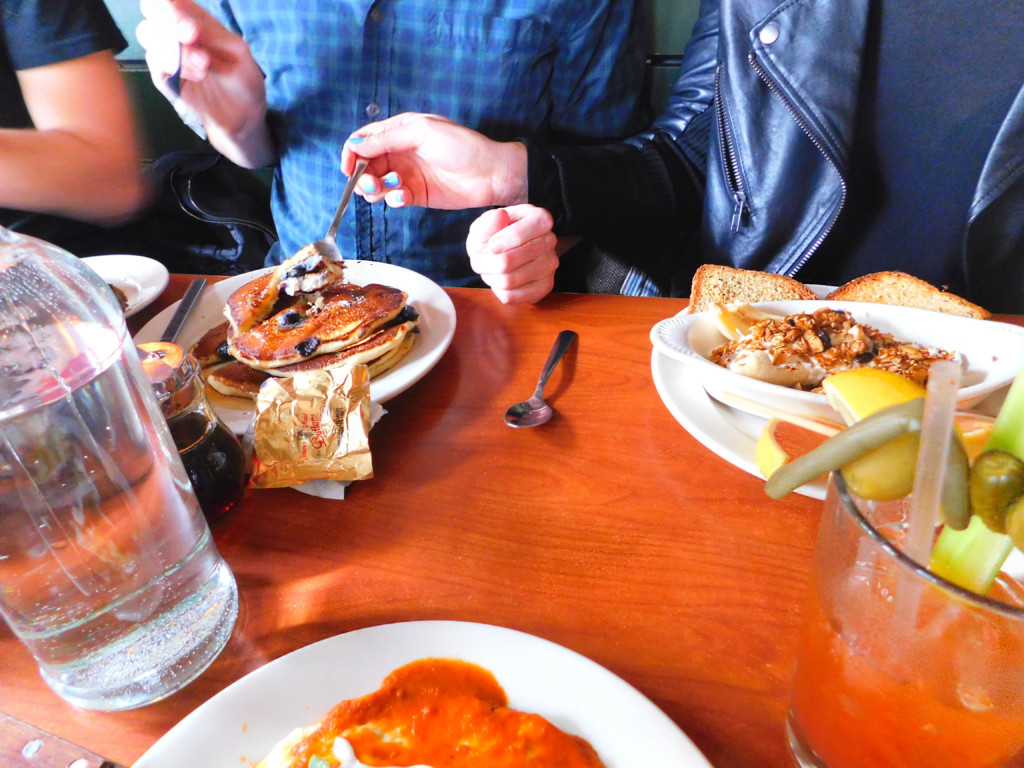 11:38 Bryan’s going to be a dad soon (May 20th is the due date) which is mind-boggling to me. Personally, I’m obsessed with babies in an uncharacteristically suburban way, but no one in my particular social circle is about to take care of a tiny sobbing person (that isn’t me). While I’m low-key reeling our food gets here—cheeseburgers, blueberry pancakes, huevos rancheros, monkey boats—and then talk somehow bleeds into karaoke stories.

Once upon a time Zach had a Washington Heights apartment on top of a police station. He was told he could use the fire escape and go up on the roof, so at one particular party he did just that, with all of his friends singing Dr. Horrible together. Obviously.

Later that night his friend Joey says, “Hey, this guy is on the roof and he has a gun.” Zach dismissed him to go to the bathroom, comes out of the bathroom, and Joey is adamant about the guy on the roof. “And right at that moment, the door to my apartment –”

“Do you want some more coffee?” a waiter interrupts. We get refills before Zack continues.

The door gets kicked in and it’s two gun-toting NYPD officers telling everyone to freeze, asking if anyone lives here. They yelled at him for five minutes about how it is so not ok to be on the roof, that they thought he was breaking in, and to “never do that again, ever.”

“And then you all sang Dr. Horrible together,” Dani chimes in.

“I think the alternate title for this column was going to be Dr. Horrible’s Sing-Along Blog,” I pipe up.

“I like the image in my head that after the cops put their guns away and turn to leave, one turns around and says, ‘By the way, whoever was singing Dr. Horrible was flat,’” Drew offers.

And that’s how we’re retelling the story now.

12:55 Btw, Evelyn led me believe this was their first breakfast together (a momentous occasion) but that’s wrong. When they recorded their first EP Dani brought muffins – hand-crafted muffins, no less. “I feel a strong need to take care of everyone,” she explains. Clearly there are like, real perks to being in this band. Evelyn: they make muffins, they make music.

Incidentally their former drummer would promise candy when promoting shows (Bryan: “I’m very insecure about being compared to the old drummer, so now I’m thinking about what I have to do.”) and yet never delivered. I find this incredulous. “It’s so easy to acquire candy too. You just have to go to a doctor’s office; they have all those lollipops…”

“I thought you were going to say you just go to Duane Reade and get candy, but no, you were just like, ‘You can steal candy from somewhere,’” Dani says. Oh, sure, that too. 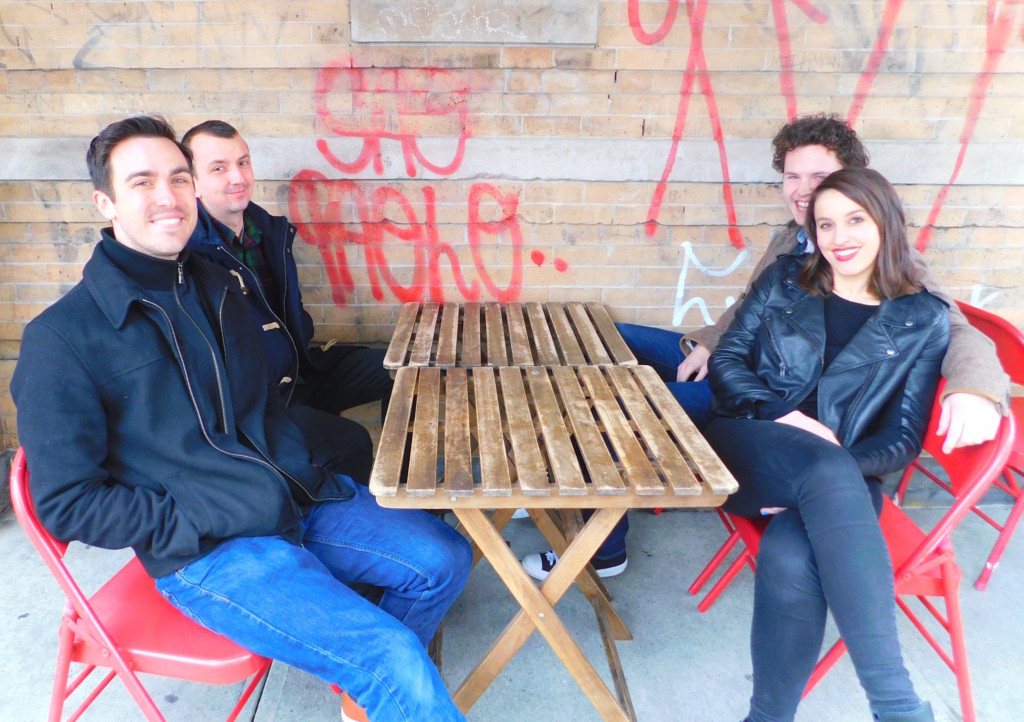 12:04 The band’s lamenting that they didn’t bring stickers and before I realize that they mean, you know, band stickers, I pull some stickable Disney characters from my tote bag. Zach personally finds stickers disgusting, but would’ve gone with Dumbo, Drew selects Monsters Inc’s Mike Wazowski, Bryan’s unfamiliar with most characters and settles on Nemo, and Dani picks Aladdin because he was her first (very valid) crush. She believes that’s a common infatuation, and the other animated alternative was Robin Hood.

“Ok, he was a literal fox” I say, although “Robin Hood Fox hot” instantly comes up as the second Google search when I try to get a picture for the table. There’s a darkness to this discovery. Also for some reason I always thought everyone’s creepy anthropomorphic crush was Simba from The Lion King (Dani: “I get it. I don’t feel that way, but I get it.”)

Anyway, the Aladdin appeal I understand in my old age: “He sings, he’s poor, he really is every guy that I’ve dated so far.” The band points out that he also has those sexy parachute pants and owns a monkey. Yeah, “owns a monkey” is definitely a box to check off.

Speaking of check, ours mercifully hits the table before this conversation gets any weirder.

12:36 After an exhilarating time playing on a McCarren Park jungle gym, Dani asks if I want to see the baby gift the band got Bryan. Uh, yeah, more than anything in the world. So out of the bag Bryan pulls out the teensiest onesie with a single word shouting across the chest. 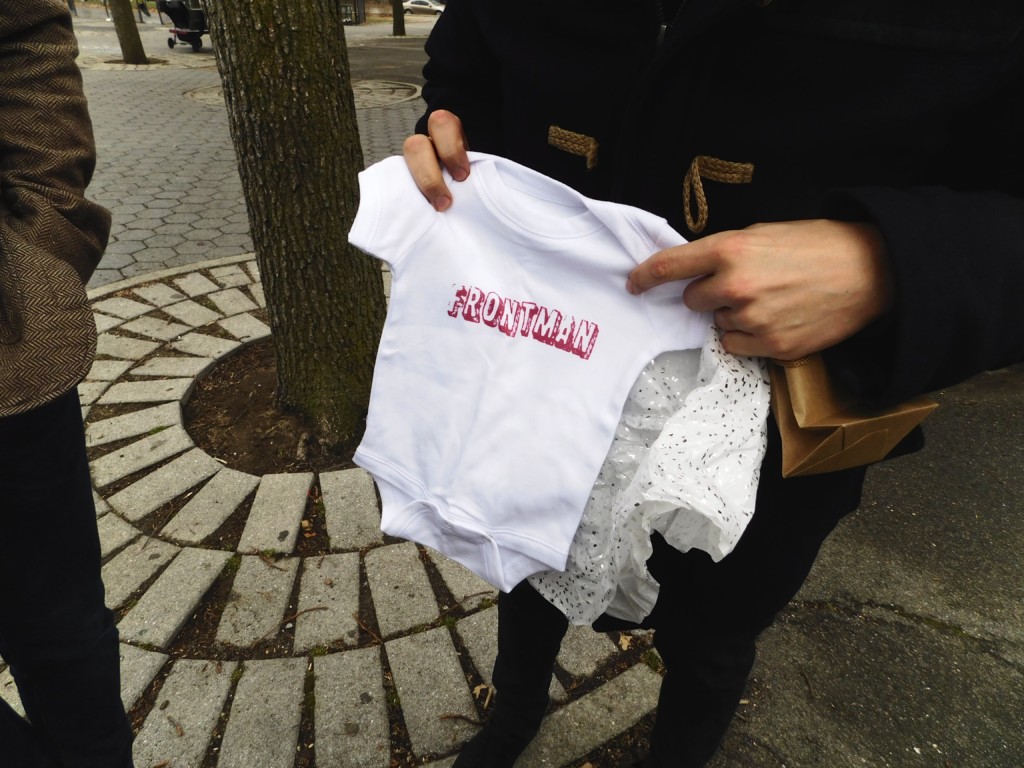 I’m emotionally frazzled typing that out, it’s my damn suburban sentimental side. Maybe also my existential side: it’s crazy how we all start out as a tiny blank slate before we seek out our Disney spirit animal and find a job that isn’t soul-crushing. Growing up is just playing around with identities until you find titles that feel right. It’s endearing that the band wants to start this newborn’s life with a strong label. Who knows, maybe one day she’ll be a frontman, too. Failing that, she could always be like Evelyn: delightful.

You can listen to Evelyn on Bandcamp and visit their website at OhEvelyn.com.