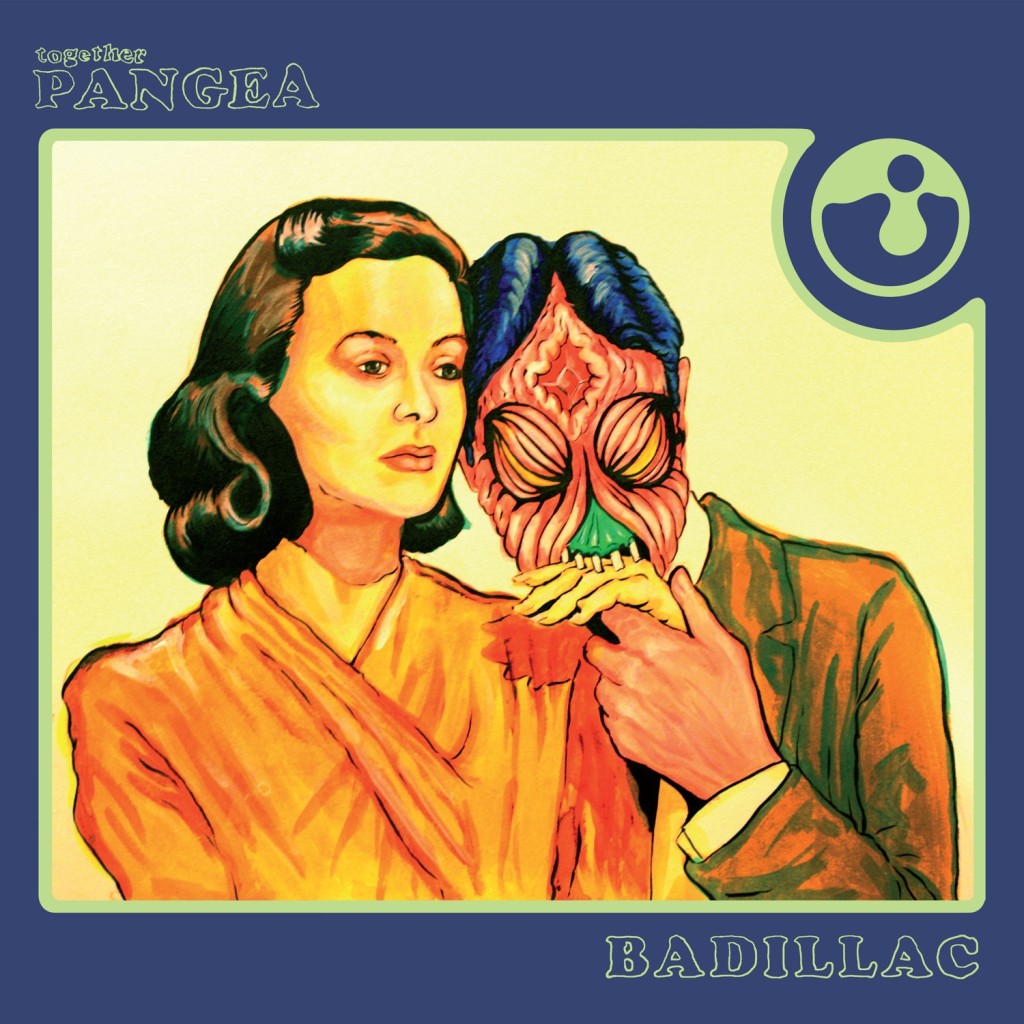 Up until now, LA three-piece together PANGEA has perfected an undiluted garage rock aesthetic, with two straight albums filled with track after blisteringly high-speed track of violent, maniacally fun and often sort of garish punk-informed rock and roll. It was kind of one-note, but the note was a good one: the group’s aesthetic trafficked in irreverent energy and sexual frustration, and was bolstered by the disparaging deadpan of frontman William Keegan’s vocals, as well as the spininess of the group’s stripped-down instrumentals. This instrumental simplicity and unchecked energy worked in the young band’s favor. Even when the group lacked breadth, their noise turned to full blast for the length of an entire album, it played into together PANGEA’s disheveled, youthful style.

The group’s new album, Badillac, clearly holds this framework as its headquarters, but doesn’t take long to begin wandering outside of together PANGEA’s well-worn stomping grounds. The production is slightly cleaner and more mature-sounding than what we’ve seen in the past from them, the album is thematically a bit more melancholy, but the most noticeable shift is in the weightiness of the instrumental lines. Heavy, hard rock bass lines add heft to Badillac‘s composition, and serve as a gratifying extra kick to the energy of the album.

By halfway through, you may be wondering whether together PANGEA has finally grown up. The answer, “Sick Shit” will tell you, is no: “My dick is soft/these things mean nothing to me,” Keegan whines, before the song launches into a punchy, moshable hook that would be heartbroken if it weren’t so damn snotty.

“No Way Out,” though, is a bleak, pensive little number: much quieter than the kind of sound for which together PANGEA is known. The song still maintains a very simple structure, lush with cello and vocal lines that cycle broodingly over the track like vultures. Though it isn’t my favorite track on the album—the repetition, ultimately, doesn’t bring us anywhere remarkable– “No Way Out” establishes the low point of a dynamic range that helps the highs hit higher.

However, the next and last track on Badillac, “Where The Night Ends,” is much more satisfactory, and manages to apply the entire spectrum of the album’s emotional range to just one song. Simmering and catchy, “Where The Night Ends” matches the intensity of its dark, power-packed riffs with a vocal line that’s first whispered, then screamed. The deconstructed intimacy the group hints at throughout the album is finally, undeniably realized with the hidden track that emerges after a minute of silence following “Where The Night Ends.” Stripped down, distorted vocals and guitar end Badillac on an introspective, and beautifully weary note. At its close, the album zooms out, away from the music’s violent immediacy, and offers a bird’s eye view of the wreckage left in its wake.

Go here to purchase Badillac, out January 21st, and listen to the title track off the new album below: