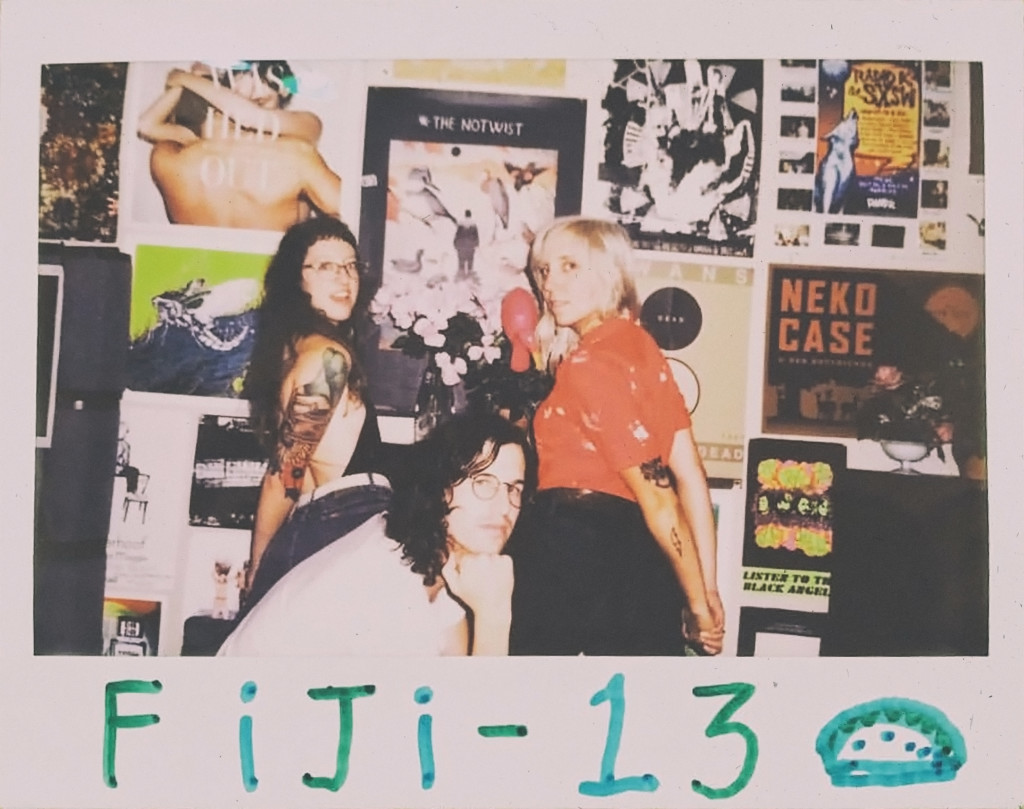 Minnesota is a cold place, full of winter warriors trudging through the streets in search of bars with hot tunes. On first listen, FIJI-13 sounds like anything but Minneapolis: they are peppy, surf-infused, and upbeat. Yet on a closer listen, the reality of life seeps through. “Mansplain It To Me bb,” the first single off of FIJI-13’s new EP Heavy Breathing, swings a bat at the patriarchy with a level of sarcasm that’s pretty impressive.

Sisters Hilary and Heidi James handle lead vocals for the band, as well as writing the scathing lyrics heard on this latest track: “Explain to me how to throw a football pass, and what kind of pants look best on my ass.” It’s a stripped down middle finger of a song that could easily be picked up by a studio looking for the perfect female empowerment track to promote the next Reese Witherspoon box office smash (or the original Goldie Blox Commercial).

We sat down with Hilary, Heidi, and their drummer Steve Crowley to talk about how they came to land in the Midwest and why sex positivity is the word.

AP: I have to start out the interview by telling you all: I’m from Fergus Falls, Minnesota.

Heidi: And that’s maybe all we know about Fergus Falls.

AP: That’s about all anyone knows about Fergus Falls. Are all three of you Minneapolis born and raised?

Hilary: No, we’re all from the far reaches of Midwestlandia. Sort of. Steve is from Milwaukee. Heidi and I are from Denver via Southeast Asia.

AP: Southeast Asia? Alright, we need backstory. Tell us a little bit about how the band formed and how you ended up in Minneapolis!

Hilary: Steve and I met at a bar in Iowa City and became buds. Heidi and I have known each other our whole lives, as we are sisters. We wanted to start a band but didn’t know how to play “rock band instruments” so we each picked one and learned how to sort of play them.

Heidi: Oops we didn’t really answer your question correctly! We all just moved here post-college cuz it seemed like a cool spot and we’re gluttons for weather punishment.

AP: Your sound is much more surf than snow. What inspired Fiji-13’s sound?

Heidi: First off, can we use “more surf than snow” in some bio stuff please?

Hilary: Well. None of us know how to surf but we thought it would be funny if we sounded like we could. Also we really like surf rock bands.

AP: I love that garage band / punk feel. What artists inspire your music?

Hilary: A wide range, from local Minneapolis punk bands like Kitten Forever to Sleater Kinney to the more melodic surfy/grungy bands like La Luz and Guantanamo Baywatch, and Ty Segall. Minneapolis has a really amazing and supportive punk and garage scene, which has definitely influenced our sound.

AP: Your new single “Mansplain It To Me bb” is a fun song about a painfully real problem: Mansplaining. Steve, can you tell us a little about the writing process on this one?

Steve: They sent me a video of themselves playing that song the day they wrote it and I immediately knew it was a smash hit.

Hilary: He is very good at telling us everything we never needed to know. JK, Steve is great.

AP: I’d ask where the song comes from, but as woman I think I know. It feels incredibly organic. As sisters, is it easy or difficult to write lyrics together?

Heidi: We actually don’t do a lot of lyric-writing together. We usually come to each other with songs that are mostly complete, but we do some edits and help each other through the parts where the words aren’t totally right.

Hilary: Sometimes we’ll come up with themes of songs together and then one or the other of us will pick it up and work it out.

AP: Who took the lead on “Mansplain It To Me bb”?

Heidi: I did. Hilary titled the song though.

AP: Your new EP is titled Heavy Breathing. What kind of subject matter can we expect from the album?

Hilary: The subject matter is mostly sex positive songs. As women (who spend a lot of time in the music world/in the normal world) there is such a frustrating difference between how people view sexuality and sexualization between binary sexes. Those songs are an attempt to normalize and be honest about that and poke fun of it all in a way.

Heidi: It’s almost like we’re blowing things out of proportion in order to make the point clear that people need to just chill out about women as sexual beings.

Hilary: There are also some songs on the album that are basically just big ol’ “fuck yous” to the patriarchy.

AP: I love the approach of using humor to tackle something considered taboo or controversial. Have you been able to perform the songs live?

Steve: Hell yea. We play a lot of shows in Minneapolis and around the midwest. We just got back from a little extended weekend tour two days ago. We love playing and bopping around in the car playing shows with our friends.

AP: Can we expect more tour dates coming up?

Steve: Yes. We plan to tour more in spring and mayyyyyybe winter. Heidi and I are teachers so there are very specific times that we are able to have time off to tour.

AP: Final question: I’m a music fan, a tourist in Minneapolis proper. Where do I go to see some killer tunes?

Heidi: One of our favorite places to play and go see bands is called Eagles 34. It’s like a functioning Order of the Eagles club for veterans, filled with the amazing neon and taxidermic eagle art, weird thrift-store decor and $1 jello shots every night. They have three different stages so you can go on a weekend and hear three very different shows, from Polka or Zydeco bands filled with old couples dancing, to wild heavy metal shows, to bedroom synth pop and more. Also they have the nicest bartender in the world there. Really everyone there is pretty dang nice.