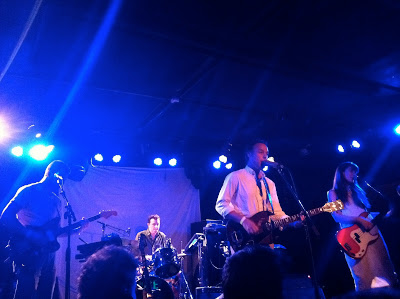 Here We Go Magic are crowd pleasers. When they released the video for “Make Up Your Mind” (in which a variety of women suffer seizures instigated by frontman Luke Temple’s mystical musical powers), they unwittingly unleashed a maelstrom of indignation from a some overly sensitive viewers. Rather than embrace the controversy or use the subtle sexual undertones (some YouTube commenters noted that the “seizures” were rather orgasmic) to generate buzz for their third album, A Different Ship, out May 8th on Secretly Canadian, they shelved the video entirely. This decision seems baffling for a band whose video projects often skew a bit bizarre and push some boundaries, but the choice was made to avoid any conflict that might take attention away from the music. That music was front and center on Thursday when the band played its sold-out record release party at The Knitting Factory. And once again, their crowd-pleasing nature came into play, with a nicely rendered set that showcased the newest album and offered surprising takes on old favorites.

Openers Glass Ghost, a Brooklyn-based band who have cultivated a creative friendship with Temple, were a nice compliment to the set. Offering a contemplative batch of eerily unspooling tunes, Eliot Krimsky’s otherworldly falsetto swirled through Mike Johnson’s ephemeral synths and diffused beats, then over an unusually reverent audience. The power of Glass Ghost lies in moody disconnect, which they achieve through an elevated sense of fragility and a slightly autistic manner of delivery. Both players were stoic to the point of coming off as robotic, interacting with the audience and each other minimally, while retro video projections flashed on the screen behind them. Though the subdued nature of the set was unusual for an opening band, whose typical responsibility is revving up an audience for the headliners, this wasn’t necessarily a detractor. As testament to how powerful ambivalence and alienation can be, the tragically gorgeous “Like A Diamond” served a perfect thesis statement, and somehow television talk-show host Marc Summers (of all people) became the poster child for that lost feeling.
Marc Summers is famously known as the wise-cracking host of Nickelodeon’sDouble Dare, which ran from the mid-eighties into the early nineties and pitted kid contestants against the likes of a giant ice cream sundae and some water balloons filled with tomato sauce; if they failed to answer trivia questions correctly they had to take a “Physical Challenge,” the end result of which often involved getting covered in some sort of goo. There were a bunch of spin-offs, including “Super Sloppy” and “Family” editions of Double Dare, which caused my parents to buy a second television when I threw a fit because the evening news theywanted to watch aired at the same time. Summers also hosted What Would You Do? in which guests were regularly doused with slime.
What does this have to do with Glass Ghost? Well, the irony in the fact that Summers spent the better part of his adulthood getting slimed and sliming others is that he suffers from Obsessive-Compulsive Disorder, a mental illness which can manifest itself in a frantic need to stay immaculately clean. That dichotomy – the disjointed sensation of wanting to participate, be involved, stay there, to feelversus the failure to do so despite having these emotions and knowing what is normal, even doing what is normal but remaining out of place – is at the crux of it of Glass Ghost’s music, a lá seminal Radiohead track “Fake Plastic Trees”. So when the projections shifted to a distorted video recording of Double Dare(including many shots of Marc Summers grinning through his despair) it brought not just a wave of nostalgia, but also served as a peculiar illustration of a much deeper theme.

For all the removed grandeur of Glass Ghost’s set, Here We Go Magic brought just as much intensity to the stage, though it was of a different variety. Backed by bandmates Jen Turner (bass & keyboards), Michael Bloch (guitar), and Peter Hale (drums), Temple’s enigmatic voice soared through renditions of “How Do I Know” “Hard To Be Close” and old favorites like “Fangela” and “Casual”. The new record was produced by Radiohead’s Nigel Godrich, who became interested in the band after seeing them play at Glastonbury. For most of the tracks Godrich employed a live recording technique with few digital flourishes meant to enhance but not perfect the recordings. It’s hard to say whether that emphasis came from his initial, inspiring exposure to the band, or if the in-the-moment improvisational methods utilized in the studio have infused their latest performances with a newfound go-for-broke energy. But something magical indeed happens when the band is playing together as a cohesive whole.

It was not uncommon to see the band extend normally unassuming musical breaks into spiraling, extravagant jam sessions more apropos of arena rock bands, or hair metal even. But instead of cock rock, the audience was treated to the plaintive, dreamy “Over The Ocean” rendered epically, in all its shimmering glory. Even if it seems overwrought for more a genre of pop that is typically more humble, make no mistake: this is exactly how these songs are meant to be experienced, with all their dormant power front-and-center. It’s a bold move in these times; as the influence of technology on indie pop becomes more and more ubiquitous, it’s become increasingly uncommon to see a band who can actually rock out but that’s exactly what Here We Go Magic do, and do well. Though Temple started this project as a solo one, he’s found some tremendously talented players whose skill is so assured that they make each other look even better. And their confidence in the new material truly gives these tunes a worthy showcase. So maybe they don’t need a gimmick or a controversy to propel their own hype. No one at the show went into seismic convulsions, but the crowd was very, very pleased indeed.