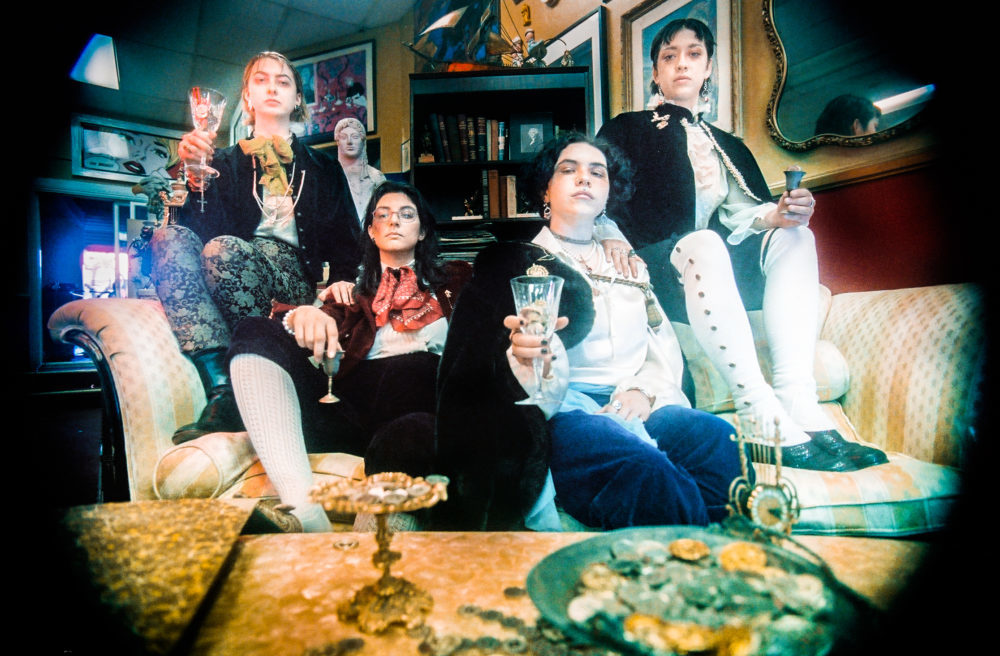 Most women have at some point been prohibited from doing something they wanted to do because of their gender, whether due to subtle stereotyping or overt oppression. “Earthquake,” the latest single by L.A.-based, riot grrrl-inspired indie rock band Girl Friday, is an anthem for women who are sick of these kinds of limitations. “I have a lot of friends whose brothers did things like skateboarding or sports or things that were kind of messy and were told over and over again, ‘Don’t do that because you’ll get hurt, but your brother will be fine,'” explains guitarist Sierra Scott. “So it’s that energy of ‘you can’t do things that are destructive’ — it’s kind of just screaming for the sake of letting things happen.”

With a fun punk beat, angsty shouted lyrics, and energetic guitar riffs that evoke a feeling of mischief, the single is intended to sound like “an explosion of energy” and capture the feeling of being “stuck and trapped and wanting to shake things up,” both on an individual and a societal level, says singer/guitarist Vera Ellen. “I just want to feel like an earthquake/Everything is boring for fuck’s sake,” they belt in the chorus. Drummer Virginia Pettis remembers recording it in a basement with a floor covered in guitar pedals. “I feel like I saw the biggest pedal board in my life,” she says.

“Earthquake” is one of several highlights off the band’s debut full-length album, Androgynous Mary, out on August 21 via Hardly Art. On the LP’s first single, “Amber’s Knees: A Matter of Concern,” chaotic electric guitars take the listener through a narrative about watching reality TV and turning a blind eye to society’s injustices. On “Clotting,” a slower-paced, more classically indie track, the band sings of “exorcising demons like they own me.” The opening track and second single, “This Is Not the Indie Rock I Signed Up For,” is also mellow, but still uplifting, serving as a tribute to the band’s memories together. “Little burning and little lies/They pull at my hair and tell me what I’m like/But I’m so happy you’re here/I’m so happy you’re with me,” goes the heartwarming chorus.

“A lot of it is little moments of a lot of the past couple years of us being in a band, just kind of trying to paint small moments of community among darker times, connecting with other people or with yourself in ways and maybe in little unexpected moments that might otherwise go unacknowledged,” says Scott. In the same spirit, the video features campy vignettes of the band — which includes Ellen, Scott, Pettis, and Libby Hsieh (bass and vocals) — touring, then collapsing into giggles.

The friendship that’s so palpable in Girl Friday’s music and videos stems back to their days in college together at UCLA. After playing their first music together in Pettis’s room in 2017, they performed at house parties around campus before touring professionally. Their band name comes from a film class Ellen took where she learned about the trope of the “Girl Friday” — the secretary behind a powerful man who actually does all the work (they soon learned that they shared their name with many secretary agencies).

Playing with loaded phrases and layers of meaning is something Girl Friday does exceptionally well. Though it’s steeped in metaphors and knotty guitar licks, “Public Bodies” is meant to convey “the idea of being under the foot of somebody else or disadvantaged in some way and trying to push the foot off, get out from under the foot,” says Ellen – in that way, it’s thematically similar to “Earthquake.” In the video, the band looks after a collection of plants – some real, some animated, perhaps in a nod to the millenial horticultural self-care boom – until kitschy stop-motion weeds threaten that peace of mind. It’s playful, but it’s also not hard to draw a parallel to the very real frustration with the patriarchy and how it can interrupt someone’s well-being. “Does the average man feel like he’s on the outside?” asks the song’s deadpan lyrics. “When I say I’m in pain, they don’t believe it.”

The title for the album is similarly intriguing – while the group was walking around, they passed a mural of what looked like an androgynous Virgin Mary, and something about the image spoke to them. “Androgynous Mary is all of us — she lives within you,” Hsieh jokes, describing the music as less clean and edited and more aggressive than the band’s past EPs, mimicking their live sound. “When we recorded the songs, we tried to get everything live and dub over to sound thicker or heavier and get different tones,” Scott explains.

The band members, currently in different parts of the world, have been working on music independently and plan to record more together once they’re in the same place again. In the meantime, their album serves as a testament to the bonds that remain unlimited by constraints, whether temporal, geographical, or societal.