Vanessa Long is the woman behind Cillie Barnes, a five-piece “avant-pop” project out of Happy Valley, California. It’s her Ojai style, her witchy lyrics, and her shaman (that’s right, I said shaman) that make this band feel intrinsically LA. It’s an easy aesthetic to dismiss nowadays. Every band north of the 101 carries crystals in their pocket and has a reiki master on speed-dial. It may be trendy, but Cillie Barnes is careful to craft music with a genuine story and message attached.

As I prepped this interview, I found myself humming Cillie Barnes’ single “Brainwash” off of 2013’s Happy Valley. It has an effervescence, a cheeriness to it that’s refreshing. “Mudslides” goes in an altogether different direction: Long’s sweet, often childlike voice creates an eerie, unsettling vibe. “‘Mudslides’ is trip down memory lane with an ex-lover, a shaman and a ghost. And a reflection on how sometimes, they can all seem like one in the same,” Long says of the song. It’s an interesting duality that plays with the message of the song; memories of a romance can feel sweet and sour at the same time.

Listen to “Mudslides” and read our interview with Vanessa below!

AF: You grew up in Newport Beach, California. For those who aren’t familiar with Orange County, can you give us an idea of the music scene there?

Vanessa Long: Haha, yes. While I was there I was pretty into the straightedge hardcore scene believe it or not. That was the bulk of the shows and the bands coming out of my area. I loved going to live shows so that was really my only option. I’d drive up to LA for other bands. I had Mark McGrath’s history book for a summer school class once too. And I feel like Train went to my high school, so all and all, kind of fun and kind of bleak.

AF: An interesting reaction to all that sunshine. When did you first start writing your own songs? Were they in that hardcore vein?

VL: No – that would be amazing though. I started writing songs when I was around 20 or so. I’d always written. But 23 for me is when it really started kicking in. I started a band with one of my best friends on accident and he just encouraged/put up with me writing a bunch of nonsense and singing on some of his tracks. Let me play the drums on occasion. Once I started writing lyrics I couldn’t stop.

AF: Were they “gypsy-pop” from the start?

VL: Hmm…in a way. I’ve always liked spooky stuff. “Disney Goth” might be a more accurate representation these days. The music’s evolved since then with the band I have now and continues to do so… my writing style switches but you can always expect some sort of mythological creature or weird setting to pop up.

AF: I very much enjoy your Maid Marian fox/mermaid hybrid image on The Facebook.

AF: You live in Happy Valley, California. I had to google it to make sure it existed. It’s a hop, skip, and a jump outside Sacramento. What made you move there?

VL: It’s actually in Los Angeles – it’s a part of El Sereno which is in East LA but I’ve googled that too. Isn’t that where they take Scientologists away to die secretly? Which is sort of similar to our household here… just kidding.

To answer the second part of your question: I found a place I liked that had lots of land all around it and I could make music at all hours of the day or night and no one cared. It’s a hillside and such a beautiful part of LA. I’ve been here for 9 years and people are just now starting to gentrify.

AF: Oh! There are two Happy Valleys? I was going to say it’s quite out there.

VL: Haha yes, just googled to be sure. There’s a YouTube video called Scientology- Missing in Happy Valley which I’ll for sure be watching.

AF: In an interview with West Coast Fix, you described your writing process, saying “…I want to do a song about Ancient Egypt and the Book of the Dead. I want to meld it with fast food, acetaminophen, aliens and crystals. I want to make it sound tribally and dub-steppy and folky. Now, how can we can do that?” What stories, objects, and music did you draw on for your new album, Cobra Lily?

VL: Frogs are featured a lot, Luna Moths, Snake Oil Salesmen, dodgeball games, the ocean always seems to be an overlying theme, Halloween, Ursula, Freddy Krueger, Albert Einstein, dogs, natural disasters, and parties that are nice. I’m sure I sing about drugs of some sort too. Or wine.

AF: Can you give us insight into your new single “Mudslides”? What was your initial inspiration and how did you craft a song around it?

VL: The verses are whirlwind, dead-end romance and the chorus is longing for someone else. I’ve listened to it a ton of times now and think it can mean lots of things. It was written about a guy and a trip to New Orleans, how it felt like the beginning and the end all in one trip. Our keyboard player Nicky, aka Nick White, started riffing around on keys and I thought the lyrics fit nicely on top. Also shoutout to my shaman, Bobby Klein, who gets a name-drop in the first verse! 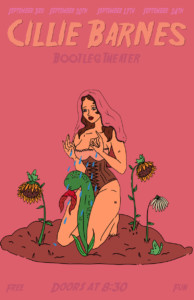 AF: I love the album artwork for Cobra Lily. It definitely has a different vibe than your previous records.

VL: I found her stuff online forever ago and looooved it. She’s super elusive and I couldn’t find her anywhere. I finally tracked down her real name and had to find her Etsy store where she didn’t sell her stuff, just purchased. I was a full blown creep. I just hoped it was her. I heard back from her like 8 months later when I had just finished the artwork. Haha. But I was like PLEEEASE.. she sent back two options and they are both so dope. Anyway, she goes by Bape.ril.

AF: In September, you’ll be doing a residency at The Bootleg Theater. What can a prospective audience member expect from a Cillie Barnes show? I heard a rumor papier-mâché might be involved.

VL: I have been toiling all month creating giant jungle pieces and carnivorous plants… we’ll see how it plays out, but I want it to look really awesome. Also, we’re bringing different bands together each show that don’t normally play together. Really want each night to be a totally different experience from the others. We have some other things up our collective sleeves but one will have to come and find out…

Cillie Barnes’ debut full-length, Cobra Lily, is due out September 21st. Are you a Los Angeles native? See Cillie Barnes LIVE at The Bootleg Theater this September. Full lineup below. Get your tickets HERE!