It’s been a banner year for Cincinnati hip-hop artist Audley, who kicked off 2018 with the release of his debut studio album Pink in January and just finished up a month-long residency at Cincinnati’s The Comet. The weekly shows were named The Love and Light Series, which he says was inspired by the musicians he’s met and lessons he’s learned this year. Though he reps impressive rap skills with an energetic flow, what really shines on Pink are his buttery smooth R&B vocals—it’s no surprise that he names Childish Gambino as a musical influence. Here, Audley reflects on The Love and Light Series, how he manifests success through positivity and uplifting others around him, and gives us a sneak peek of what he’s bringing to 2019.

AF: How did your Love and Light Series go?

A: I honestly don’t even know where to begin! It was probably the biggest accomplishment I’ve ever done in my life. There was a lot of talent in one room every Thursday, just really good music bringing the community together. It felt like the perfect way to tip our hat to 2018, just one big celebration, and then MOTR Pub was absolutely nuts. TRIIIBE came up and did a guest performance out of nowhere and just slammed it down. It was everything I hoped for. I almost didn’t even do it.

AF: Really? Why not?

A: It’s just a huge commitment. If I wanted to do it, I wanted to do it right. So I told everyone I had too much going on at work, I had too much going on in my personal life, I just didn’t have time to do this and they’re like, ‘If there’s any time for you to do this, it’s right now.’ So I literally booked the whole series in four days and made it happen.

AF: What drew you to the Love and Light theme?

A: This year has been positivity-driven. I met Jess Lamb and The Factory last year at the CEAs [Cincinnati Entertainment Awards] and their message is very self-empowering, very spiritual. They’re just very much a beacon of light to tell you everything is gonna be okay. Their mantra is you’re beautiful, you’re powerful, you can make it. I was in a really rough spot when I met Jess and it really got me through the year, so the mantra has always been be a light, spread light, spread love.

AF: So based on the experience, would you do a residency like that again?

A: Something like it. I like the idea of a recurring event, just because it builds an audience and garners excitement. Would I do it every Tuesday for a month? Probably not. Would I pick a bigger venue and do it quarterly and do blow outs? Potentially. I’m looking into what that could be. Each venue has its pros, but it has its huge cons also.

AF: Your album Pink came out in January. Do you have a favorite song off the record?

A: I’d have to say my favorite song is “Sleep Alone.” That is like the best songwriting I’ve ever done. The melody, the progression from small to big from verse one to verse three, the beat is a banger—Devin Burgess produced it, he’s super talented. That song is just really pretty and I wrote it right before “Awaken, My Love!” came out, [Childish] Gambino’s record, and it just reaffirmed Pink for me. It was like, if he’s gonna dive into this beautiful funkadelic vibe, I can do the same. So I’d say “Sleep Alone” is probably my favorite. Obviously the bop of the record is “Game Over;” everyone loves that song. Honestly when I wrote it I didn’t know it was gonna be the song and then out of nowhere it had four times the streams as the other tracks, so it was like this one’s it, I guess. 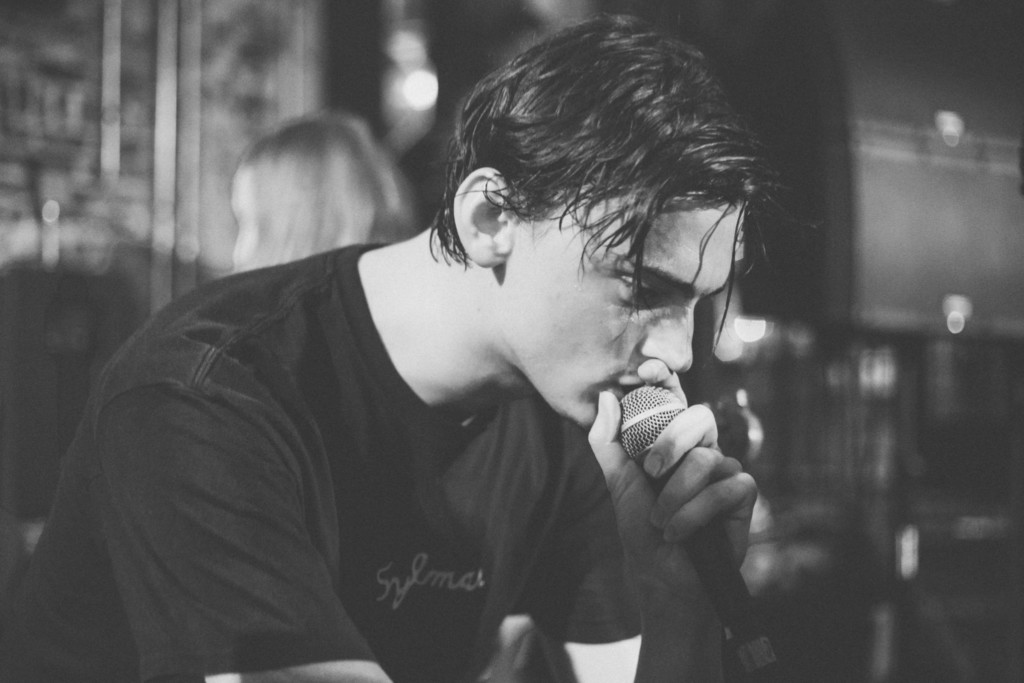 AF: I love the R&B feels. Would you say Childish Gambino is a big influence on you?

A: Oh yeah, later Gambino. Because The Internet and on really spoke to me. I love his writing, [on] 30 Rock, and Community. He’s so funny and even his stand up is great, to the point where when I saw he was trying to make music I was like, dude, stay in your lane, because to me his music wasn’t as good as his writing. Now that I think of it, that’s such an ignorant perspective. He did a freestyle over Drake’s “Pound Cake” and it was amazing and I fell in love with him watching that.

808s & Heartbreak by Kanye West is my favorite album of all time. It’s the most vulnerable he’s ever been on a record, the best melodies he’s ever written, and I love 808 drums. André 3000 was the first rapper to show me that you can flex with class. He literally would be in a suit, but you’d still be intimidated. There’s such an elegance and fluidity to his flow, but that was his flex, and that was during the time of G-Unit and The Game. It was like these people that were really stunting on people, and I was like I wanna be like that guy.

AF: Looking into next year, what can fans expect?

A: Next year fans can expect definitely a new record. I think I’ll be able to make one relatively quickly. I can’t promise that it’s going to be [themed around] a color, which likes breaks my heart to even say, but I’ve learned and grown and have shifted my perspective so much this year that “colors” is such a single-faceted through-line. There’s textures, there’s emotions, there’s literal artifacts that symbolize things. I love the idea of owning a color because you get to own a world through a hue, but I think I’m ready to do something bigger. I’m ready to make a bigger world.

AF: You said you’re looking to collaborate more. Does the collectivity and openness of the Cincinnati hip-hop scene make that a little easier?

A: I would say a year and a half ago, it wasn’t like this. Everyone was so worried about putting themselves on that people didn’t understand that when you help someone else out, you get to elevate together. They thought that there was this finite amount of energy in a box and they thought people were taking their shovels and they were like, well, if I give him some then I don’t get some. Energy is infinite and the more that people have the more that people can grow off of each other’s energy. We’re all playing the same game. We’re all in the same scene; we all have the same obstacles. If you are trying to pull someone down to your level, that’s the same amount of time you could’ve used to elevate yourself to theirs. That’s why Love and Light was so important because we drove home every single Tuesday [that] you have to spread love, you have to be a light, even in your darkest of times. That’s when you need to shine your brightest because other people may need that light, too.

AF: That’s beautiful. Anything else you’d like to say to your fans?

A: I can promise that I will be doing a lot more shows out of town next year, and as of right now I’m working on the 2019 game plan. But I know that whatever I do, I’m going to curate something really special for this city, whether that’s a monthly or quarterly something—it’s gonna be Love and Light on steroids.