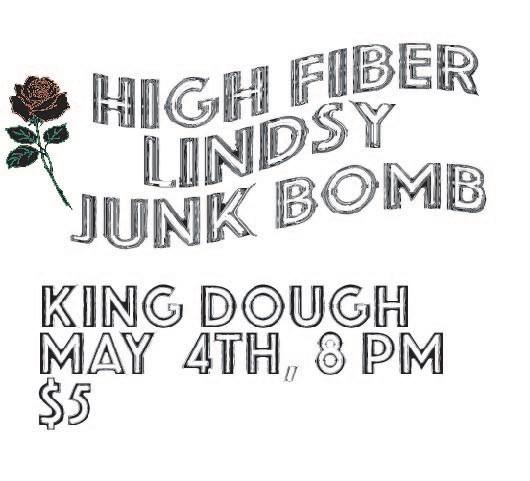 Located on the north end of the city square, King Dough is Bloomington’s bourgie-hipster pizza spot, the type of place that offers a pizza topped with grapes, bleu cheese, and honey (which I highly recommend), alongside charcuterie and local craft beer. Drawing from an industrial aesthetic and open kitchen concept, King Dough has a large main room and a much smaller bar tucked away at the back of the restaurant. It was in the back room where I saw Lindsy, Evening Glow, Junk Bomb and High Fiber perform last Thursday.

Opening the evening’s set was the psychedelic lo-fi local group Lindsy, comprised of Tommy Muldowney (bass and vocals), Patrick Maloney (guitar and vocals), Brett Hoffman (drums), and Nina Pitchkites (keys and vocals). The band’s shoegaze-inspired performance entailed airy melodies, spaced-out pedal affects, and multi-layered instrumental textures delivered in a mood that was technically cerebral yet casually distant. Being one of the two local bands hosting the event, Lindsy set an informal tone for the night. After finishing their second song, guitarist Patrick Maloney observed, “Well, that went about as poorly as it could have ”- not that anyone either noticed or cared about whether or not that was true. Still a relatively new group, “Nod Head” is the only single Lindsy has released thus far, via Soundcloud.

Chicago-based art rock/dream pop four-piece Evening Glow was a welcome last-minute add-on to the event. Their sound was less stylized than Lindsy, so band members Aaron Cada, Vincent Tieri, River Snyder and Aidan Cada had more freedom to drift in and out of related sounds, namely twee pop, emo, and pop punk. A lo-fi gloss glued the set together, operating as the cohesive thread running throughout their performance. Although they have not been around for long, the band has put out two full albums since September: Letters From Home and Beneath Faded Stars. Their newest single, “Blush,” arrived back in February.

Next on the set list was Junk Bomb, a four-piece punk band based out of Little Rock, Arkansas. Junk Bomb pushed the energy and noise levels past the venue’s breaking point. The band’s already aggressive distortion-heavy guitar riffs and the frontwoman’s frenzied vocal act and stage presence were overshadowed by a drum performance that was confrontationally loud – my ears are still ringing as I write this. While it is great to watch lightning-fast punk drumming done well (especially as a beginner drummer myself), the drums were too loud for the tiny room that they were being played in. They washed out and distracted from the rest of what was happening in the act; it’s easier to get a sense of what Junk Bomb is about by listening to the tour demo available on Bandcamp.

My ears were in pain after Junk Bomb’s performance, but luckily for me High Fiber reintroduced the more chilled-out psychedelic lo-fi aesthetic of the earlier acts. Local band members Tommy Muldowney (vox/guitar), Cesar Escarmilla (guitar/synth), Andy Laszio (bass), Alex Rigsbee (keys/guitar), and Ben Archer (drums) describe their sound as “psych pop lo-fi disembodied head sexplosion,” delivering it via their latest LP Corner In, Corner Out. There was considerable overlap in sound between High Fiber and Lindsy, which is understandable as both bands featured Tommy Muldowney on his various instruments.

High Fiber maintained a relaxed repartee with the crowd, which had already significantly thinned out at this point in the show (to be fair, it was about 1:15 am at this point, over two hours past the event’s advertised runtime). Adding to the informality of the performance, there were a series of disruptions throughout the event, including a visit from the cops, who arrived at the show in response to a noise complaint. Although the show kept this grad student out past her bedtime, I thoroughly enjoyed the variety of bands that were featured at this event. I even picked up a few tips about attending future shows at King Dough. For one, I will make sure to bring earplugs with me next time.