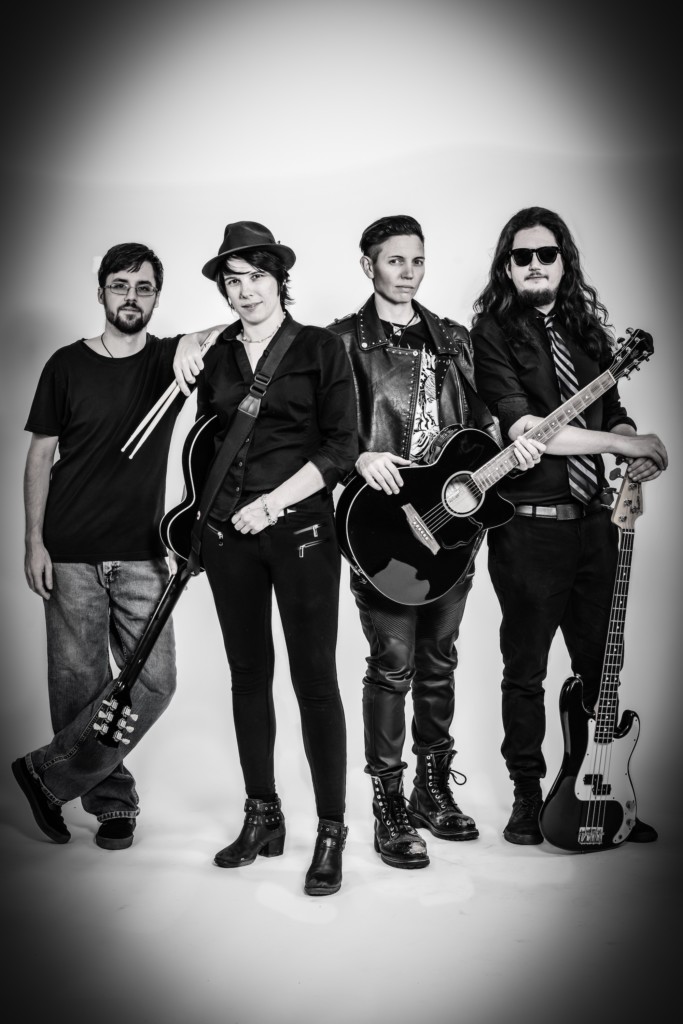 The Ain’t Sisters are one of the raddest and most versatile groups Atlanta has to offer. Whether playing as an acoustic duo in front of a crowd of fifty at The Red Light Cafe, or captivating audience as a rockin’ quartet, they bring passion, charisma, raw bravado, and a certain indescribable “oomph” to the music.

The dynamic duo – aka Barb Carbon and Arrie Bozeman – sat down with Audiofemme to discuss their latest record, Marrow.

AF: Thanks for taking the time to talk with us! We know The Ain’t Sisters had an incredible start. Do you mind sharing that story?

BC: Arrie and I have been friends for close to 15 years. When I met her, she was just a teenager playing lead guitar for the first time for our friend Hollin Gammage. She played some shows with me over the years, backing me up on lead guitar. Over time, we became best friends, and in 2012, we were on a trip to Folly Beach, South Carolina, and we spent a lot of time playing street guitar that week. People kept coming up to us and saying to one of us or the other, “You and your sister are so good!” We, of course, are not sisters.

Jokingly, we said we should start a band and call it The Ain’t Sisters. That joke persisted, and when we got back to Atlanta, she taught me how to play her songs and we started booking some shows under that name. Two years later, we had added a bass player and a drummer, and the rest is history. You’re always supposed to say that at the end of the story, right?

AB: We got into a bit of a situation with the cops at Folly Beach over illegal busking, and Barb told one of them he probably had a small penis.

AF: How did you initially get into music? What made you decide to join together to form The Ain’t Sisters?

BC: Music always felt like a part of me. Growing up in my parents’ house, I was exposed to good stuff. My dad listened to the Beatles and The Highwaymen. Both of my big brothers played guitar and I was always trying to get my hands on one myself. When I was 14, we moved, and the new house had an outbuilding with a bunch of crap in it. The landlord said I could play with whatever I found in there, and, lo and behold, I found a shitty old guitar. The strings were about 2 inches off of the neck and it sounded horrible, but I was determined to learn how to play. I never really had much support musically, so I’ve always had to scrap and scrape and make do. I suppose I still do that. It was a good place to start because I’ve never taken anything for granted.

AB: I’m just here for the ladies. We formed The Ain’t Sisters to confuse straight women and make men wish they had vaginas. We’re sort of like a new facet of feminism.

AF: You recently released a record, Marrow. What was the creative process like?

BC: Ha! Long. We started talking about making the record in early 2015. In November of that year, our friend and engineer, Critter, gave us a push. He said, “We’re going into the studio next week.” We were so not ready. We didn’t have solid arrangements. We hadn’t done any pre-production. Luckily, we recorded at Woodridge Studios, which is a small home studio that is run by a friend of ours, Phil Abbate. He and Critter both gave us extraordinarily reasonable rates, so in the end, it didn’t completely break us to have to do most of our pre-production in studio. It was the most massive learning experience. Some of us had more prior experience than others, but in this particular scenario, we were all learning as we went to some extent. We got lucky and were able to make it all come together in the end, but we didn’t end up putting the record out until this past November. Three years! That’s a long incubation period.

AB: I got nicknamed TC in the studio. TC stands for Tyrannical C*nt. I think we almost killed Critter, and the band for that matter. I personally had a great time, and I’m thrilled with our results.

AF: What inspires the music?

BC: Life. Isn’t that the consummate answer? Haha. I would say that, for me, writing tends to be an outward expression of my emotions and my philosophies. I’m a thinker. It never stops. I’m always chugging away on some idea or exploring a new concept. Occasionally I just have a great line pop into my head and I’ll build a song around it, but more often I’m ruminating on a situation in my life… a relationship, an adventure I’m having, stuff like that. I think a few of my best songs have come from a dark place. I write happy, hopeful songs to try and cheer myself up. Sometimes it works, sometimes it doesn’t. Either way, I usually get a good tune out of the deal.

AF: Which artists and bands have influenced you the most?

BC: Always my favorite question. Without a doubt, The Indigo Girls were the most formative influence for me. Emily’s writing, Amy’s grit and passion – it was those elements that really gripped me. I would also place Patty Griffin, Michelle Malone, Aimee Mann, Sheryl Crow, and Lucinda Williams up near the top of the list. Those, along with an enormous list of local bands that you have never heard before. Hope for Agoldensummer and Trapper’s Cabin are probably the biggest of the lesser-knowns. I could literally go on all day in this category. Right now, my single biggest influence would be Shovels & Rope. I just love their intensity. I want to have that kind of energy on stage. I want to be some androgynous mix of Carrie Anne and Michael when I grow up.

AB: The Atlanta and Charlotte music scenes have been my greatest influence. So many great songwriters and players. I’m grateful to be involved.

AF: If you could tell your younger selves anything, what would it be?

BC: Practice. Learn music. Don’t just play chords and use guitar as a vehicle for songwriting. Learn how to speak through your instrument. I’m 38 years old and I’m just now truly learning the language of music. It’s never too late, but I wish I’d been told that when I was 16.

AB: Production takes time and patience is key. Growth is constant and inevitable.

AF: What’s your favorite part of being in the Atlanta music scene, and how has the city influenced you as artists?

BC: I’m sure everybody says this about their city, but there’s truly no place like Atlanta when it comes to our music scene. Whether we’re talking about songwriters or players or the huge, incredibly supportive community of music lovers, Atlanta is the best. The worst part about it is trying to decide which amazing shows to hit up when you have a night off.

I would add that the Atlanta scene and the Athens scene have a massive crossover, and Athens is a monster: R.E.M, Caroline Aiken, The B-52s, Drive By Truckers, Widespread Panic… there’s just such a rich and diverse history of music here.

Lastly, I’d say that the sense of community here is second to none. There’s no competitive vibe here. Everyone is inclusive and supportive of their peers. When we see Adron playing shows with Donald Fagan or Carly Gibson (of The Pussywillows) and Sami Michelsen get picked up on tour with Mother’s Finest, we’re all back home cheering them on. There’s an undercurrent of understanding around here that rising tides lift all ships. When one of us gets a break, it means good things for the entire community. We have no need or desire to tear each other down. Atlanta’s music scene is about symbiosis and love.

AB: I love the inclusiveness of our tribe. Everyone lifts each other up. The abundance of talent and graciousness is humbling.

AF: What’s next for The Ain’t Sisters?

BC: Oh man! A lot! I’ve been meaning to sit down and write out an itinerary so we can all keep track of where we’re supposed to be and when, but I’ve been too busy, so I guess that says a lot. Our drummer, John Cowin, is off on a grand adventure with his lady in Thailand for three weeks, so Arrie, Boudreau (bass), and I are doing a handful of smaller shows this month. We’re at Square Pub in Decatur on Valentine’s Day and again this Sunday, February 17th. We’ll be at From The Earth Brewery with Donna Hopkins on March 21st.

This might be a secret, but I’ll let the cat out of the bag: Ralph Roddenbery has invited us to be guests on his set at Springfest the weekend of March 23rd in Live Oak, FL this year, which is an amazing opportunity and such an honor. We love Ralph and we love our Florida family. Spirit of Suwanee Music Park has the most magical vibe, too, so we’re beyond excited to play that stage.

When we get back, our next stop will be Grizz Fest at Terminal West on March 31st, where we’ll be joining an all-star lineup of local bands, including The Grapes and Copious Jones, to honor and celebrate the life of our friend Kevin Meaders, who passed suddenly two weeks ago. Kevin was such an integral part of the Atlanta music scene for decades. There’s a huge hole in our community, but this is definitely going to be a joyous occasion because he would have wanted it that way.