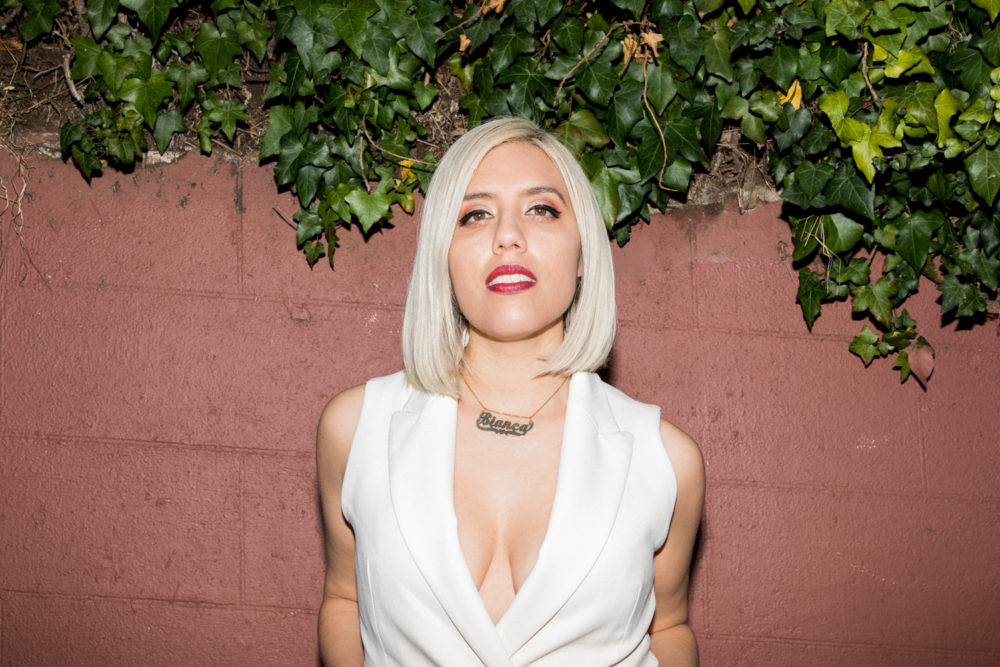 The first single Bianca Oblivion owned was “Pump Up the Jam,” the 1989 techno-pop hit from Technotronic that would endure on club dance floors for decades to follow. “When I was a little kid, I made my parents go and buy that for me,” she says by phone. It proved to be a seminal influence for the L.A.-based DJ and producer.

“Early ’90s house and techno were a big influence,” she continues. “You’re a kid, you don’t really know what it is. You just know that it’s music you like. So, I didn’t really identify what it was until later on.” Instead, it came together with Madonna, Janet Jackson, ’90s hip-hop and everything else that Oblivion heard in her childhood to build a foundation for the eclectic tastes she would develop in the DJ booth and her home studio. Today, Oblivion links together styles like baile funk, reggaeton and house-offshoots like Jersey club, vogue and UK funky.

Oblivion got her start on college radio in the ’00s, playing indie and post-punk tunes alongside her collection of hip-hop records, with some freestyle and house thrown into the set. In 2006, she began playing at clubs in and around Los Angeles. She set her sights on remixing and producing music in 2016, about a decade after her start in the club world. Oblivion’s first releases were unofficial edits. The two earliest of those, “The Girls Dish n Tell” and “House of Gully,” drew from early ’90s house jams. Not long after that, her edit “Chant Con Sal,” which melded the King Doudou cut “Sal” with “I Chant, You Vogue” by Leggoh, got a shout out in FACT Magazine. “That was one of my first edits and it got some attention,” she says. For Oblivion, that was incredibly exciting, so she kept going. Since then, she’s released of edits, remixes and original tracks.

Locally, she’s perhaps best known for the Latin American and Afro-Caribbean-focused party CULosAngeles, which she co-promoted with Francesca Harding for two years. She’s known for playing a broad range of music and for cultivating events that are inclusive. “I’ve always made it a space that’s inclusive of women, LGBTQIA artists and party-goers and want to make it a safe space for everyone with all different kinds of influences and sounds coming through,” says Oblivion.

Even during lockdown, Oblivion has been keeping the party going. On a Friday night, not long after Los Angeles County shut its bars for the second time during the COVID-19 pandemic, spirits were high on Zoom where Oblivion was DJing. It was 9pm in L.A. and there were already 66 people in the room when she began her set, some of whom would raise a drink or turn on the dance moves when their screens pop to the front. Oblivion gave the crowd a bounty of late-night, heavy-impact beats, with traces of turn-of-century pop – Destiny’s Child, Britney Spears, Nelly. It was the first of her two sets that night for Spiral, a weekly Zoom party founded by fellow L.A. DJ The Saddest Angel. Oblivion initially came on board as a DJ, but recently, she’s been co-promoting the event.

“It’s unpredictable,” says Oblivion by phone. That goes for both her set and the crowd, which can bring in visitors from virtually anywhere with an internet connection. Oblivion had tried other livestream platforms before and says Zoom is surprisingly comparable to the club because of crowd response. “You an see the people vibing and dancing to it on screen,” she says. “Even if they aren’t on screen or don’t have the video on, they respond by chat.”

It’s become a special space, lockdown aside, because of the virtual party’s ability to bring in guest DJs and party-goers from across the globe. “I would actually hate to see this space disappear once the regular clubs open,” says Oblivion. “We don’t know how that’s going to happen or when it’s going to happen. I imagine that, at least in L.A., it will be this way for some time.”

Oblivion, who also hosts the monthly NTS show Club Aerobics, has also been spending the time at home working on her productions. Her latest track, “Calling,” appears on the Club Djembe Vol. 2 compilation (out today), from the label (and U.K. club night) Club Djembe. Oblivion says that she was influenced by ’90s Latin and tribal house for the track. ” I don’t know if people really expect that from me,” she says, “but I think that once you hear it, you’ll understand that it’s a good fit with the rest of what I’ve done.”

She also recently collaborated with the MC XL Mad for another new tune, “Bubble Pon Di Bed,” that Oblivion will self-release in August.

“I actually feel that my current production really does stem from the initial edits I did, which also stems from my DJ style,” she says. “I just love to mix a bunch of different dance genres.”