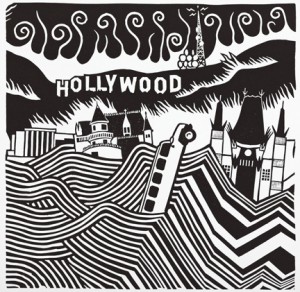 Thom Yorke’s side project Atoms for Peace has an album coming out.  F i n a l l y.  We are excited about the debut from Yorke, Flea (of Red Hot Chili Peppers fame) and uber-producer Nigel Goodrich.  But we are also just as excited about this live animation thing.  The album art is wild and mysterious and apocalyptic, so why not animate it on the side of a building?   Created by Radiohead visual artist Stanley Donwood and INSA, the aptly named “Hollywood Dooom” mural was done stop-animation style to give us a GIF on the side of a building.  It is badass.  See it HERE!