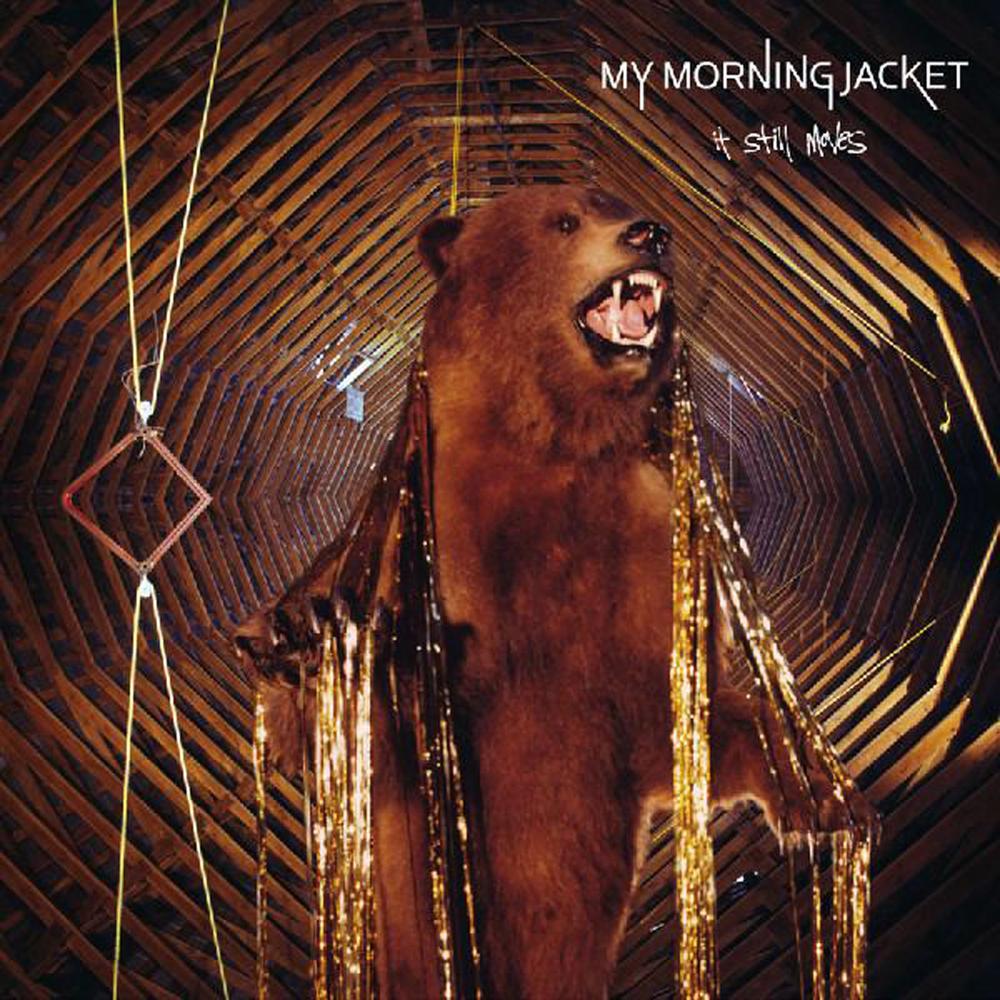 From humble Kentucky beginnings to performing on Saturday Night Live, cartooned appearances on American Dad, and alongside Bob Dylan on a nationwide-tour, My Morning Jacket has made it somewhere, to say the least. Their penchant for blues and folk-tinged rock captured my ears from the first time I heard them. I was sitting in Spanish class in 9th grade, out of sight of my teacher, of course. The album I was surreptitiously listening to It Still Moves, which has been out 10 years this September. Talk about feeling old. I broke the CD a long time ago, but the digital copy will always exist; Indeed, it has stood the test of time.

When I say that this is probably my favorite album of all time, it’s probably my favorite album of all time. I mean, one look at the album cover and you have a hard time saying “no” to listening to it. The songs still carry weight as if hearing them for the first time all over again. From the tropical flavored opener “Magheeta” to the magnificently somnolent (in the best way) closer “One In The Same”, to the ubiquitous track seven snoozer, there’s no “bad song”. Oh, and the fact that their usual recording spot is in a grain silo is pretty badass, to boot. Lead singer and guitar player Jim James’ arresting lyrics always fit the bill. The band would not be what it is without his reverbed crooning, adding celestial atmosphere to their songs. “Golden” captures the feelings this album elicits perfectly: barreling down a long road, going who knows where, with someone you love by your side.

Halfway through the album, their hazy, listening on a Sunday afternoon vibe, begins to crescendo into their showpiece, “One Big Holiday”. The furious tapping on the high hat at the beginning communicates to the listener exactly what’s about to go down. The music, replete with blaring guitar solos off the Richter, speaks for itself, as lyrics are minimal. Following this, the album immediately dives into the comedown track, “I Will Sing You Songs”. A song regarding a relationship nearing its’ inevitable end set to a beautiful dream-like arrangement. One of my favorite parts on the album is in the middle of “Run Thru”. Slow to rise, it takes a complete 180 with a synth heavy interlude complete with Iron Maiden style riffs. Imagine watching bread bake in the oven then a guitar rips out of the bread and blows your mind. A weird occurrence, but that’s exactly what it would be like.

The ethereal beauty of their double tracked vocals, especially on the end of “Steam Engine”, is so melodic and makes an imprint on your mind whether you like it or not. It becomes their trademark by the end of the album, and you want to hear more. It Still Moves is a sleeper, groundbreaking album: something you wouldn’t expect to move music forward. Without My Morning Jacket, I doubt the whole folk and blues-rock movement would’ve taken a turn for the better. Festivals such as Austin City Limits and Bonaroo are breeding grounds for bands of this sort, but My Morning Jacket gave them a confident voice by doing what they did.

Watch “One Big Holiday” performed at Bonaroo. They may have now traded in their T-shirts for suits, but when you get down to it, this is what My Morning Jacket is all about.