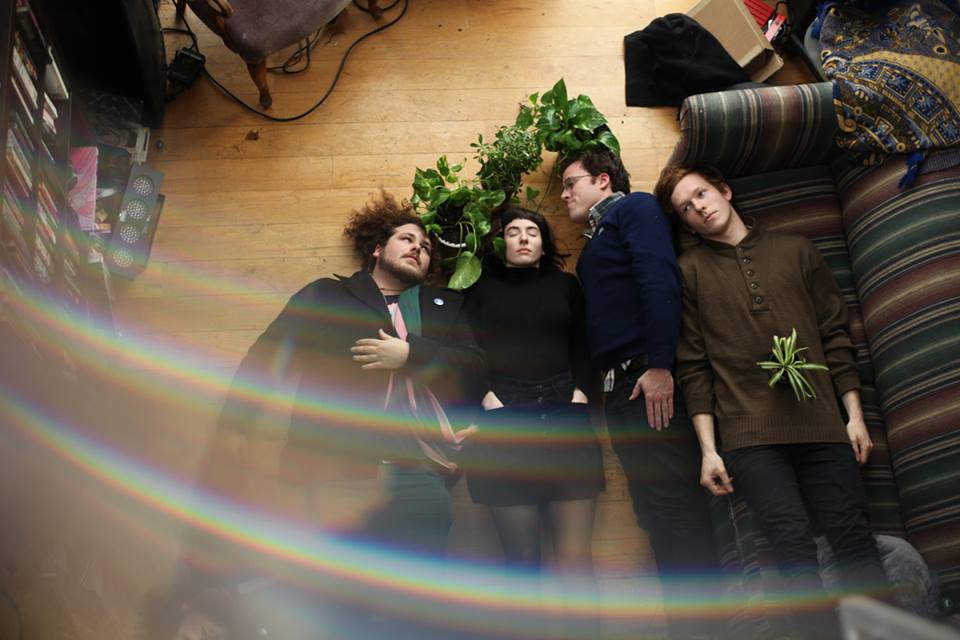 During the Savannah Stopover festival, two women sit down late at night in a dimly lit park with a box of fried chicken. One of them is me, and she unceremoniously asks a series of interview questions through mouthfuls of greasy bird. The other, a dainty, stormy-eyed fawn of Czechoslovakian stock bearing a last name bursting with consonants, answers them comprehensively. Her name is Kristine Leschper and she is the vocalist and lead guitarist of the band Mothers, who released their debut album When You Walk A Long Distance You are Tired earlier this year to glowing accolades of music writers and regular-Jo(sephin)e listeners alike. Mothers is a composite of musical ideologies resulting from Athens GA’s storied art-school scene, folk composition, rocks both indie and math and even a smattering of prog polyrhythm. Everything you want to think about how mesmerizing Kristine is based on the music she makes is completely true. Here’s what I mean:

Joanie Wolkoff for AudioFemme: You guys are on the go these days.

Kristine Leschper: Even though I say I live in Athens, it doesn’t really feel like it; when I look at our spreadsheet, we’re touring 10 out of 12 months. It’s so nice when we’re home again, but it’s a rarity. It doesn’t feel like we live anywhere.

It’s a lack of comfort but I like it.

Part of the lore surrounding the forming of Mothers is tied in with how you took a left turn from printmaking in college to music. How’s this shift to music treating you?

Suddenly we were just on tour forever! This came out of nowhere. Our drummer Matt wanted to sign a six month lease and we said, “We’d have to be touring so much for you to not sign that lease,” but then a month down the road we found out how much we’d be traveling and were like: “It’d be stupid for you to sign this lease.” So he doesn’t have a place right now. Which is cool for him.

Cool for him of cool of him?

I think it’s cool for him to not have a place right now, to be experiencing that. At the same time, though, I’m really glad I have a home.

How did you meet?

We were all just living in Athens and playing music. We knew what we were all up to and had mutual respect for each other, and we we were all into what the other was doing. It was organic.

What were you listening to while you taught yourself how to play guitar?

The Microphones’ The Glow Part 2 which is written in a linear style was a big thing for me. Just the fact that when they write songs they have an “anything can happen” outlook and it doesn’t have to be a specific structure. Also Don Caballero’s American Don and other mathier music with complicated rhythms.

Do you identify with art school rock? Prog?

Maybe a little bit. Mothers is really affected by things that were happening in Athens in the late seventies and early eighties, like Pylon who where college-aged visual artists and didn’t play any instruments, so it was this guessing game of self-taught musicians. It was this desire to figure something out without being properly taught. We’re tied into a lot of Athens’ songwriting history.

Do you write together?

We’re not really a band that can get together and stand in the same room and jam. It has to be more defined, so me and Matt, our drummer, get together, hash out what’s been in our heads and then bring it to the other guys later. Otherwise it risks never turning into anything. Me and Matt have been playing together for the longest as far as Mothers go. He was the first person that I really started playing music with; we have good chemistry musically.

I would love to work with Spencer Seim, who played guitar in Hella and is active in a group called Spock. He’s just my favorite guitar player. I love everything that he does.

If you could sit at a table and eat bad friend chicken with someone who you’ve really drawn inspiration from, who would that person be?

Does it have to be a musician? E.E.Cummings was a big part of me discovering the written word, that led me to becoming a creative writer.

What feeds your writing when you develop song lyrics?

I tend to write about the human condition. I think the way we perceive the world through emotions is the most important part of how we experience the outside world. I want for people to get out of shaming others for hypersensitivity. I really respect people who are honest about their emotions. The way we relate to ourselves and other people is so much based on knowing that you’re going to die, the limits of being a person and stuck inside of this body.

What has sensitivity given you, and what has it taken from you?

Oh, it just takes everything away. Really. It makes everything hard. It’s given me a sense of purpose, I guess, which is shitty. To be overly analytical of everything that happens is something that I do to myself. I sort of like it though. I like to make things difficult for myself and see if art comes out of it. I’ve come to terms with sacrificing myself for art.

Do you think it’s your hardwiring or learnt behavior?

I think it’s just the way I am.

Look at your white sneakers!

They’re brand new. I thought I might be able to have fun if I bought white sneakers.

You appeared to be having fun at your backyard set earlier today in the Starland District. You move so nicely while you were performing. You push up on one toe and then lean into your strumming and it’s agreeable to watch.

Sometimes I’ll get really nervous and go through the first ten minutes of a gig without moving at all, and then I’m like, “Just tap your foot! Just bend your knee a little bit,” and then it works itself out.

It’s one of the most important relationships in my life. We don’t sleep together but we’re very close. I got a headphone amp recently that only has enough wattage to send an output to headphones so you can play electric guitar in the back seat and no one else can hear you. It’s been a lifesaver on this tour… you can only sit in a back seat of a car feeling car sick for so long before you’re destroyed.

Do you have any rituals before gigging?

Just getting time alone, writing a set list. I love handwriting. It’s not carefully written every time but the hardest thing to do before a show is break away from a conversation you don’t totally want to be having. I have a hard time talking to people when I know we’re going on in five minutes. Sometimes it just means hiding in the bathroom for a bit.

It’s self indulgent. One side is ego and the other side 9s doubt. You could see it as a Venn diagram.

Do you live in the middle of it where the two circles overlap?

No, I live on both sides, I go back and forth.

Who even lives in the middle? Life coaches?

2016 finds us toggling between the ego stroke and the ego…

Death. Everything is very personal in sort of a shitty way.

What do you do about that?

Exactly what I usually do.

Do you keep a finger on its pulse?

I feel that I’m very much out of the know. To an unfortunate extent at times. I’m sometimes too wrapped up in what I’m doing to understand what else is going on out there.

As for the great trope of musical womanhood, any closing words for female artists?

As far as all that, all I have to advise is to not let it affect you. People really have an issue with that and sometimes when they’re trying to be empowering they sort of victimize them saying things like “Oh, she really shreds!” in surprise, as if being a woman in the first place is this huge hinderance. It’ll do everyone a lot of good to not talk about gender in music so much. Women can play guitar just as well as men can. Just getting out of those ideas has been really important for me – not thinking of myself as a woman in music, but just thinking of myself as a musical person.