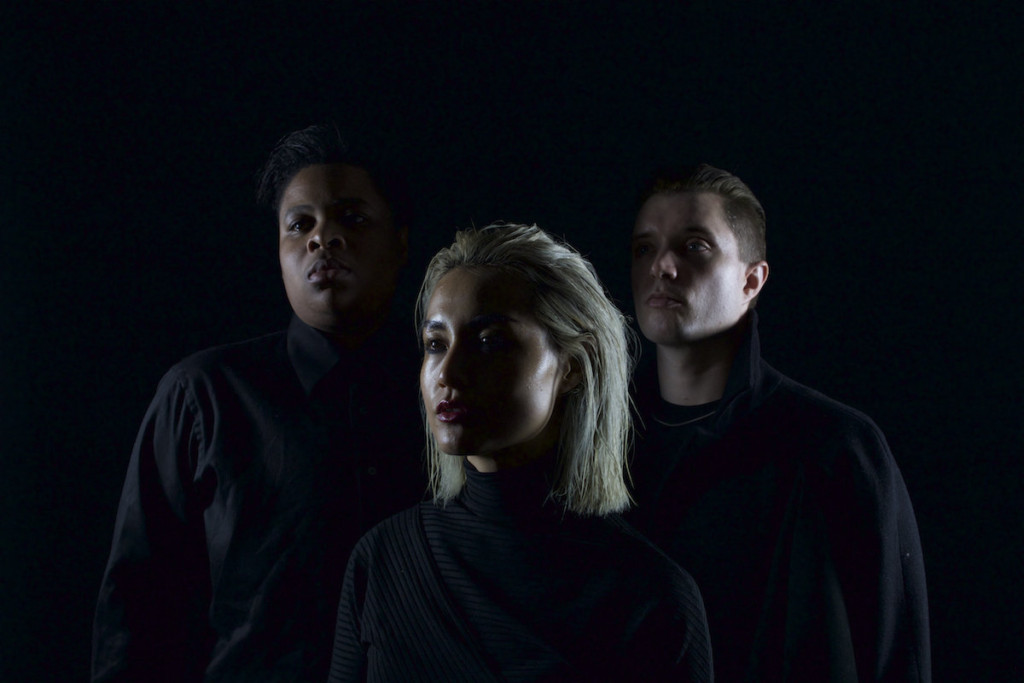 More than mysterious and so very spooky chic, Decorum is a double bass post-punk goth band based in Brooklyn composed of Sable (vocals, bass) Leif (vocals, bass) and Shay (drums). The three-piece’s most recent EP, Vail is out now on Mirror Universe Records. Moody, romantically gloomy, and fit for a horror film soundtrack (intentionally) as summer fades to fall, calling forth longer nights, Scorpio season seances, and Halloween, we sat down with Sable, who is also an accomplished beauty writer, to talk about her favorite horror films, tour beauty regimes, and racism she’s dealt with while performing. 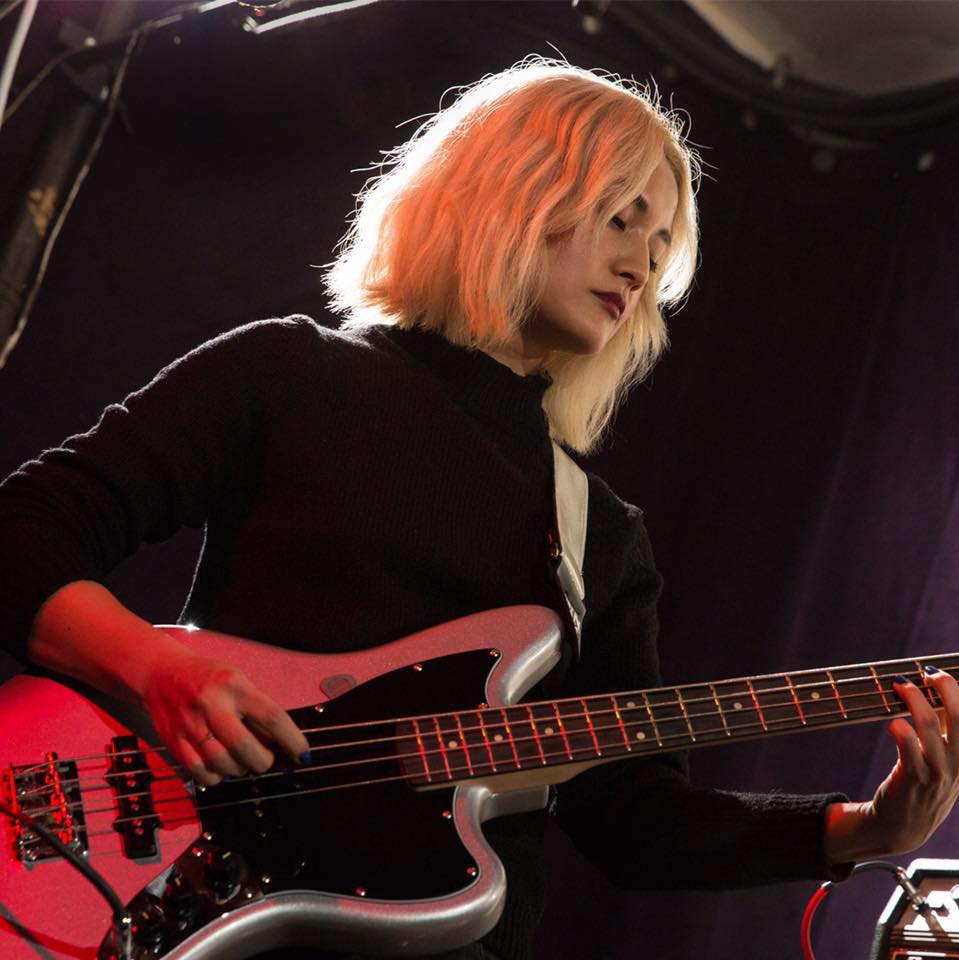 AudioFemme: How does Decorum define your sound?

Sable: We call it post-punk goth because that’s just…the thing that people get the most. I could get really thinky and give it a kitschy name but it’s such an eye roll. When I think of post-punk I think of the Cure and Siouxsie Sioux, and to me, that’s not dark; it’s very danceable. It’s singing about sad things in an upbeat happy melody which is cool too. I don’t think it’s been necessarily intentional but our sound is more gloomy and minor and dark.

What is the inspiration for your songs?

What are your favorite horror films?

There is one that is my absolute favorite. It’s French, I think it’s from 2006; it’s called Martyrs. It’s super gory. It’s basically a revenge film but with demons in it. I rented it from Videology. One of the dudes there recommended it to me; It is jarringly intense. I have to be careful about the people I recommend it to because I told some of my friends and they were like, “This is some sick shit dude.”

I’ve never creatively collaborated with a romantic partner (Leif) before, so it’s interesting. He has a ton of music experience, he’s been that guy in a band his whole freaking life. He just loves it so much. Mostly it’s us doing the writing and our drummer is amazing at picking up vibes for lack of a better term. So we’ll write bass parts and then she’ll put a different beat than I expected behind it and I’m like, “wow this totally changes this whole thing.”

So I understand bass is a new instrument for you.

The best way to learn an instrument is to give yourself a project around it and a purpose, I tried teaching myself drums but I didn’t have a project so I was just like, “Okay I can sort of do that, the end.” It helps to have someone that you’re really comfortable with to learn with. I like bass because it’s very grounded. Bass is that one thing that maybe you don’t always notice it when it’s there but you definitely notice that it’s gone. I think it’s cool to do what we’re doing and have it be way more dimensional and versatile. When I tell people there’s two basses they’re like “Oh that’s so weird,” and I’m like, “Delta 5?” When they hear it they’re like: “Oh wow. I totally didn’t expect that that’s what it would sound like.”

Will you tell me about your music videos?

The very first one we did for “Waxing/Waiting” we did ourselves. It was kind of a really off the cuff idea that I had  to shoot someone singing karaoke, but it wasn’t to our song, it was a different song. Kind of making fun of artist always lip-syncing to their own songs. I got my friend Meredith from the band Perfect Pussy, she sang a lot of Drake and Whitney Houston. The second one for “High Order” my friend Adrian did who is a videographer. He’s a motions graphic designer, he’s worked for like Kanye and all these super A-lister pop stars, but we’ve been best friends since college. He did an awesome job. I love the idea of having a music video that’s like one action, or one continuous theme. Drawing back to horror films, the part in slasher flicks where someone is chasing their victim – but you never see the killer, it’s just frantic running the whole time. So it’s me in this huge winter parka running around Floyd Bennett field one Sunday night until I wanted to die. We just did a third for “Book Burning” which was a very simple performance video.

I loved your beauty article about packing for tour. How was that experience?

We were on the road for a week, we did mostly house shows. It’s cool when you go out of New York the attitude towards shows and being present is so different. Everyone is way more excited to be there and it feels way more supportive. You may be playing in someone’s basement to 25 people, but all of those 25 people are actually paying attention. They’re not texting.

We played Toronto at this place called Coalition, it’s a true goth metal club. Everyone there was over 40 and had been a diehard goth or pink since the 80s or 70s. It was like that scene in Charlie Brown where everyone is dancing and they have their same robotic dance moves, but they have the same gothy versions of that. I don’t really see people dancing in venues unless you go to a club club. Also, everyone was really really nice. They are Canadians, but it was overly nice. Maybe it’s just because it’s a community of misfits.

So performing locally, have you dealt with any sexism?

I don’t think I’ve had as many bad or weird or awkward experiences than other people I’ve known, I mean not that it’s a competition; It feels very universal. I feel like less sexism than there’s been weird racist stuff happening. Not saying I can forgive sexism more, but because of social coding and social conditioning, I’m like, okay, there are probably some men that just don’t get it, and obviously once they’ve learned they’ll be embarrassed about any sexist shit that they’ve pulled. But with racism you should fucking know that that’s not okay. It’s really weird in those situations because depending on who it’s coming from it can be hard to know what to do.

Like an audience member as opposed to someone who works at the venue?

Yes. For audience members, I have gotten very impatient as I get older, and less censored. If someone is saying something out of line I’ll be like, “Hey that’s a really fucked up thing you said, get the hell away from me.” Generally, the person is like, “What are you talking about?” And I’m like, oh because you don’t get it. It’s not my job to teach people that. And I don’t want it to be my job.

There was a show we played at a new venue in Bushwick. The sound guy was blatantly racist. Another band on the bill also had an Asian girl in the band. He was basically lumping us together, and being like, “Oh yeah, so are you in the band with that Japanese girl?” to Leif. I’m like, “I’m not Japanese, also I’m literally right here you can talk to me.” When Leif was like, “Yeah, she’s not Japanese,” he’s like, “Whatever you call her then.” As I’m five feet away from this dude. The promoter says, “I’m so sorry, we literally got this guy last minute because our regular sound guy had something come up, so we don’t know him, but we’ll never work with him again.” I’m like, “That’s cool, we’ll never play here again.”

That’s such a bummer, I’m sorry you had to deal with that. So when can people see you perform now?

Watch Sable sprint in her winter parka below in Decorum’s video for “High Order.”