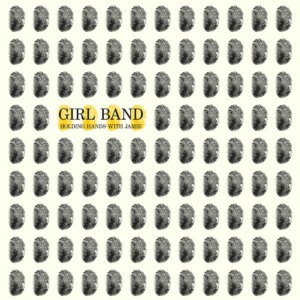 Holding Hands With Jamie by Girl Band is a beautiful mess, more musical noise than noisy music. Guitars squeal like pieces of metal screeching together in a car crash, the bass rolls up and down the fretboard wildly, and as well as some brief singing, vocals come in the form of screams, growls, shouts and intense monologues. There is structure, but it’s threatening to disintegrate at any moment. You’ll think you’ve identified a melody, only for it to come crashing down.

Whether singer Dara Kiely is remembering an encounter with a doctor who likes Abba on “The Last Riddler,” being honest about his vanity by drawling “I look crap with my top off” on “Pears For Lunch,” or vocalizing about something that isn’t quite intelligible but can be understood viscerally, every song on Holding Hands With Jamie is as riveting as it is challenging to listen to. However, the album’s standout track, possibly because of its weird, sad, disturbing and amazing video, is “Paul.” It starts with an ominous, surf-y bass line and relentlessly simple drums. Kiely seems to be talking himself in circles as the track builds and builds, until it can’t anymore and just explodes into the noise and feedback that’s been crackling in the background (As for the plot of the video, it’s better to just watch it than read about it).

If it sounds like the Irish rockers are on the verge of completely losing it at any moment, it’s on purpose. The album takes on an important context when you learn that it was inspired by the time leading up to a psychotic episode Kiely went through two years ago. Listening to Holding Hands With Jamie definitely feels like taking a break from reality, but Kiely remains in control the whole time. He’s admitted his inspiration for the album in interviews, so he’s obviously not ashamed of his past struggles, but he’s gone a step further by taking control of them, reframing them and sharing them on his own terms. The result can only be described as cathartic. And awesome. And noisy.

Holding Hands With Jamie is available now via Rough Trade; check out “Paul” below.